Should you play Hip-Hop at your wedding reception?

Of course, you should. Do you want your wedding reception to be fun or boring?

Add popular rap songs to your wedding playlist that are hot right now, the instant classics, and also old-school originals. 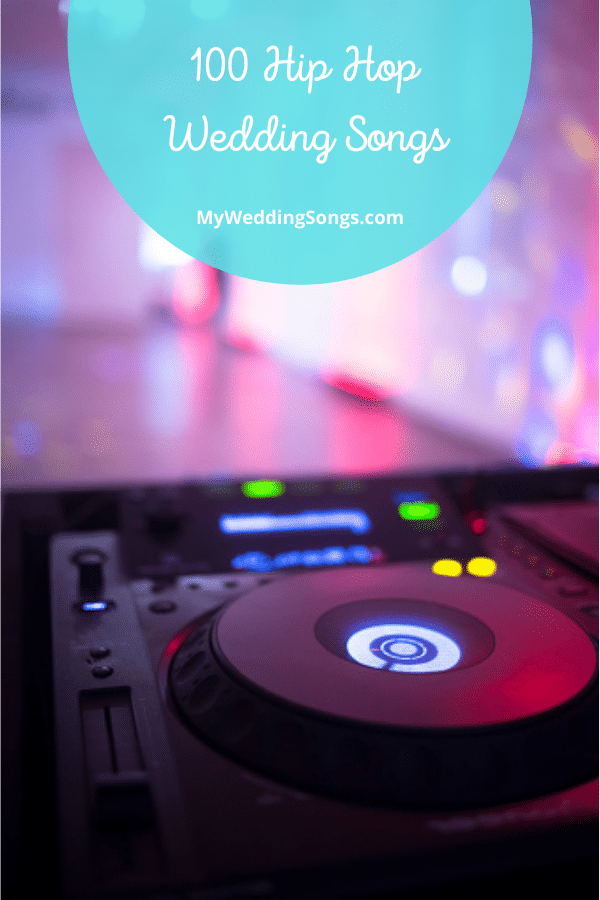 We’ve talked to wedding couples through social groups and analyzed hundreds of wedding DJs’ playlists across the U.S. that play hip hop wedding music. We selected a list just for you of the most popular and unique hip hop wedding songs for your wedding day.

(as calculated by Amazon)

We have our own list of the 100 best Hip-Hop songs for your wedding reception here. Do you see a song missing from this list? Let us know in the comments.

What is hip-hop music?

Hip-Hop has its beginnings in the 1970s block parties in New York City where DJs would isolate percussion breaks of popular songs. Turntable techniques, playing records, beat mixing/matching and beat juggling eventually developed along with the breaks. This created a foundation that could be rapped over.

Hip-hop was predominantly popular in New York City in the 70s but became immensely popular with the new styles introduced in the 1980s.

You’re my ride or die, you’re my reason why
You’re the one that I need for the rest of my life

The girl of my dreams, but I ain’t fallin’ asleep
Think both of your legs gone, the way you fallin’ for me
The same way that the rain falls
I ain’t gon’ lie, you got it all, all, all, all, all of me

Big bag bussin’ out the Bentley Bentayga
Man, Balenciaga Bardi back and all these bitches f***** (woo)

Hope that we can be more, I dreamed of you last night
You had on a big old gown and a wedding ring
You were my wife, baby, you were my wife

That my best friend, she a real bad b****
Got her own money, she ‘on’t need no n**’
On the dance floor, she had two, three drinks
Now she twerkin’, she throw it out and come back in

But, baby, you should know this
That I ain’t goin’
And I ain’t blowin’ no smoke

Lil’ baby in her bag, in her Birkin
No nine to five, put the work in
Flaws and all, I love ’em all, to me, you’re perfect

Can you please read between the lines?
My rhyme’s inclined to break your spine
They say that I’m so fine

Yeah, you’re lookin’ at the truth, the money never lie no
I’m the one, yeah, I’m the one

I’m so fancy
You already know
I’m in the fast lane
From L.A. to Tokyo

Turn Down For What – DJ Snake feat. Lil Jon
2013, Released as a single

Fire up that loud
Another round of shots
Turn down for what?

Teach Me How to Dougie – Cali Swag District
2010, The Kickback

M-bone, show these cats how to do dat down south dance
Dat we learned a lil’ too fast and bought it to the hood
And got da whole crew a**
Teach me how to dougie

I never knew a luh, luh-luh, a love like this
Gotta be somethin’ for me to write this

Girl the way you’re movin’
Got me in a trance, DJ turn me up
Ladies dis yo jam (c’mon)

Baby, I know that you like me, you my future wifey
Soulja Boy Tell ‘Em, yeah
You can be my Bonnie, I can be your Clyde

‘Cause ain’t nobody gonna die today
Save that drama for another day
Hey, we’re gonna have a good day

Super fresh, now watch me jock
Jocking on them haters man
When I do that Soulja Boy
I lean to the left and crank that thang

Hey Ya! – Outkast
2003, Speakerboxxx/The Love Below

Thank God for Mom and Dad
For sticking to together
Like we don’t know how
Hey ya! Hey ya!

I said
It’s gettin’ hot in herre
(So hot)
So take off all your clothes
(Ohh)
I am gettin’ so hot, I wanna take my clothes off

Out o’ town, put it down for the Father of Rap
And if yo’ a** get cracked, b****, shut your trap
Come back, get back, that’s the part of success

Sometimes your words just hypnotize me (hypnotize)
And I just love your flashy ways (uh-huh)
Guess that’s why they broke, and you’re so paid

So get your next of kin, your sister and your friend
Pack it up now
Choo, choo, ride on this, choo, choo

This is how we do it, all hands are in the air
And wave them from here to there

It was a clear black night, a clear white moon
Warren G was on the streets tryin’ to consume
Some skirts for the eve so I can get some phones

Came to my senses and I chilled for a bit
Don’t know how you do the voodoo that you do
So well it’s a spell, hell, makes me wanna shoop shoop shoop

Upside down and inside out
Donald’s swarmin the floor, throwing Daisy about
Minnie: Twirl to the left
Mickey: Twist to the right
Together: Movin, groovin, OUTTA SIGHT!

Symbolizes dope, take a toke, but don’t choke
If you do, you’ll have no clue
On what me and my homie Snoop Dogg came to do

Watch as I combine all the juice from the mind
Heel up, wheel up, bring it back, come rewind
Powerful impact, boom, from the cannon

My anaconda don’t want none
Unless you’ve got buns, hun

We got everybody rockin’ and everybody talkin’,
Even your grandma bought her a Walkman.
To listen to my music when she gets the urge,
And when my song hits her ears like a power surge

If there was a problem, yo, I’ll solve it
Check out the hook while my DJ revolves it
Ice, ice baby

Took her to the hotel she said “You’re the king?”
I said “Be my queen if you know what I mean and let us do the wild thing”

Come sit next to me, you fine fellow!”
You run over there without a second to lose
And what comes next? hey, bust a move!

Fight For Your Right – Beastie Boys
1987, Licensed to Ill

You gotta fight for your right to party
Party

This dance ain’t for everybody
Only the sexy people
So all you fly mothers, get on out there and dance
Dance, I said!)

Rolling Stone Magazine is an authority in the music industry. They put together a list of the Greatest Hip Hop Songs of All-Time. Hip Hop can also be categorized as Rap. It truly is a great list of the greatest hip-hop artists of all time too. 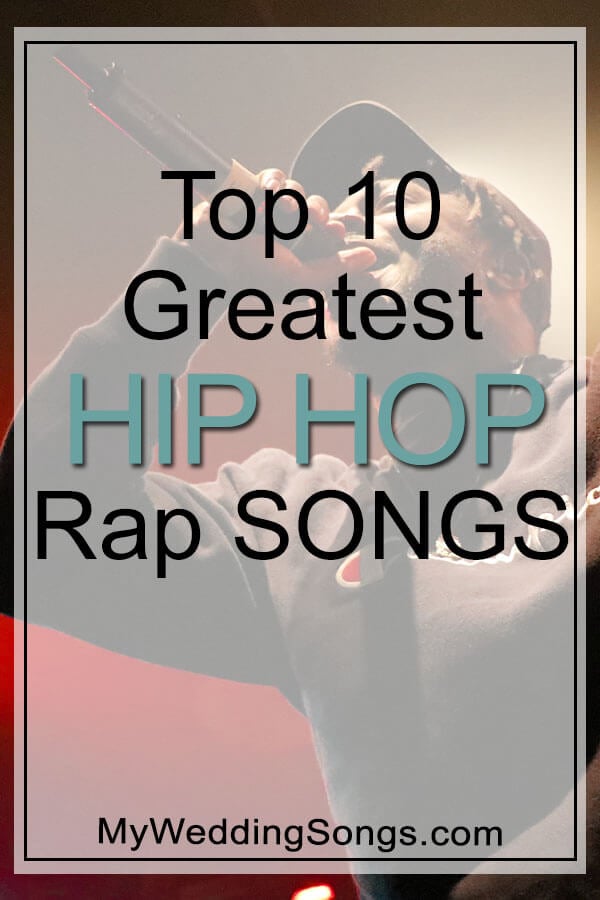 All of the songs were popular in the 80s and 90s. From the beginnings of Hip Hop, groups include Grandmaster Flash, Run-D.M.C., Sugarhill Gang, and Afrika Bambaataa. Hip Hop artists of the 90s include Notorious B.I.G., Dr. Dre with Snoop Doggy Dogg, and Geto Boys.

VH1 created a list of their Top 100 Hip-Hop Songs of all time. We got to thinking and decided to narrow down their list to our favorite wedding songs.

Hip-Hop fans can be excited as our list is part of the most memorable and historical songs in music history. The year the song was released is noted with the rank on the VH1 Hip-Hop songs list.

Here’s our list of the greatest 14 wedding Hip-Hop songs.

“Jump Around” by House Of Pain
(1992 – Ranked #66).
Not for your stereotypical wedding song. This uptempo song is for a younger crowd but will fill the dance floor.

“I Need Love” by  LL Cool J
(1987 – Ranked #60).
I Need Love is considered the first rap ballad. A classic slow song that rose to #14 on the Billboard charts. I Need Love would also be a good Garter Removal song.

“Bust A Move” by Young MC
(1989 – Ranked #47).
Bust A Move has been a time-tested dance song to fill wedding dance floors. With a fast tempo beat, wedding guests will want to bust a move to this song.

“I’ll Be There For You/You’re All I Need to Get By” by Method Man ft/ Mary J. Blige
(1995 – Ranked #44).
From all the songs listed on the Greatest 100 Hip Hop Songs, this song makes the best choice for the first dance song as a married couple. I’ll Be There For You is based upon the original song sung by Marvin Gaye and Tammi Terrell.

“Ladies First” by Queen Latifah ft. Monie Love
(1989 – Ranked #35).
We could not leave out a song from one of the most influential women in Hip Hop history. Ladies First would make a great bouquet toss song.

“U Can’t Touch This” by MC Hammer
(1990 – Ranked #26).
This is probably the most recognized Hip Hop/Pop song on the list across all genres. A great fast-tempo dance song to get wedding guests dancing.

“Baby Got Back” by Sir Mix-A-Lot
(1992 – Ranked #17)
A great fun party song to fill the dance floor. It may offend some. However, there was a viral video on YouTube that showed a bridal couple dancing to this.

“Walk This Way” by Run-DMC ft/ Aerosmith
(2001 – Ranked #4).
A great collaboration between Hip Hop and Rock all-stars. Originally performed by Aerosmith and sampled by Run-DMC. Wedding guests will want to get their groove on to this mid-tempo song.

“Rapper’s Delight” by Sugarhill Gang
(1980 – Ranked #2).
Considered one of the few songs that helped popularize hip hop music. Rapper’s Delight was revitalized with a skit in the movie The Wedding Singer in 1998. Not only can you breakdance to Rapper’s Delight, but many wedding parties also plan rehearsed dance moves to this song.

Hip hop is a style of music created from African music. For all intents and purposes, rap music can be intertwined with Hip-Hop music. Rapping is a vocal style in which the vocalist speaks lyrically, in rhyme and verse. The creation of Hip-Hop has been accredited to Keith Cowboy of the music group Grandmaster Flash and the Furious Five.

There are many claims about the first Hip-Hop recording. However, our favorite is to be The Sugarhill Gang’s “Rapper’s Delight” from 1979. The lyrical content of Hip-Hop evolved from the 1970s to metaphorical lyrics over more complex, multi-layered instrumentals.

Artists such as Chuck D and KRS-ONE revolutionized hip-hop by transforming it into a more mature art form. Hip hop from the ’80s and into the new decade formed into many genres including east coast and west coast Hip-Hop, gangsta rap, new school Hip-Hop, world, and crunk.