These are the best wedding electronic dance music songs to get people on the dance floor! Dance music can encompass all styles of music. Everyone can dance to any music style such as country, big band, rock, and more. However, our list of best wedding dance songs will primarily entail music that is electronically enhanced. 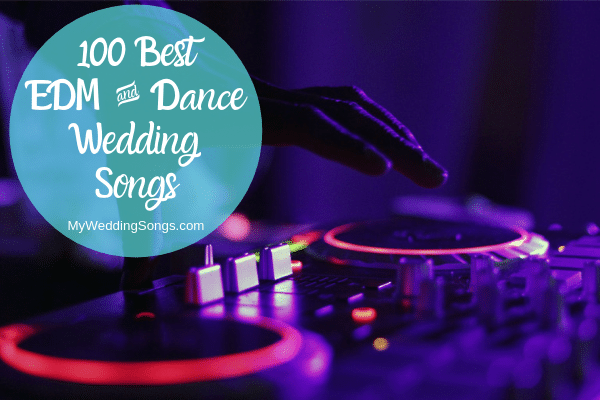 Our modern-day dance music progressed in the late Eighties in which the use of electronic musical instruments and electronic music technology was used to enhance music in song production. Electronic music instruments and technology include an electric guitar, computer, and synthesizers. In the early ’80s, dance music producers were the first to create a record aimed specifically at DJs with extended 12″ remix versions. Club DJs and rave DJs helped in the spread of dance style music to the masses at prominent clubs in America and Britain.

Growth and interest in electronic music spurted in the early 1980s with artists such as Depeche Mode, New Order, and Devo. By the late 80’s and into the early ’90s, dance clubs were primarily playing electronically enhanced dance music. This was helped to come to fruition with the inventions of digital synthesis and MIDI (Musical Instrument Digital Interface). By 1989 through the early 1990s, house and techno style music was less underground and becoming more mainstream.

90’s mainstream dance music included artists like The Shamen, KLF, Black Box, and EMF. In the past decade, computer technology has made significant strides with the development of music software including virtual studio environments. Wedding dance music includes such genres as dance, house, techno, and electronica. However, standard songs can be remixed into dance tunes such as DJ Miko’s remix of the rock song – What’s Up by 4 Non-Blondes.

Listen to our EDM/Dance playlist on Spotify.

Do you have a favorite EDM wedding song that should be on our list?  Please share it below so that we can add it!