Skip to content
Home > Wedding Music > My Best Friend’s Wedding Songs for Your Wedding
My Wedding Songs is a reader-supported website. As an Amazon Associate, we earn revenue from qualifying purchases. Purchases made through links on this page may earn us a commission but also support the artists.

There are so many great songs from My Best Friend’s Wedding to add to your own wedding playlist – including songs by Tony Bennett and Ani Difranco. Scroll down to find out what we mean! 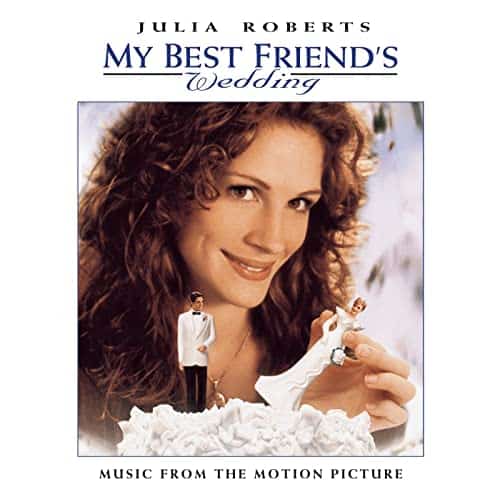 The most popular wedding song from the film is “The Way You Look Tonight” by Tony Bennett. The song is commonly played as a first dance song, a father-daughter dance song, and as an introduction song for the parents of the wedding couple.

When the world is cold,
I will feel a glow just thinking of you
And the way you look tonight.

My Best Friend’s Wedding was released in 1997. The style of the movie is “Rom-Com” (meaning Romantic Comedy). The main actors in the movie are Julia Roberts, Dermot Mulroney, and Cameron Diaz.

The movie cost an estimated $38 million and grossed $299 million worldwide.

What is My Best Friend’s Wedding about?

A woman who, by a promise made years earlier, is supposed to marry her best friend in three weeks, even though she doesn’t want to. When she finds out that he’s marrying someone else, she becomes jealous and tries to break off the wedding.

See all of the details about the film on IMDB.

The most successful version of Richard Berry’s “Louis Louis” was released in 1963 by The Kingsmen.

“Wishin’ and Hopin'” was first released by Dionne Warwick in 1962 on the B-side of Warwick’s single “This Empty Place”. Another popular cover was by Dusty Springfield in 1964 and reached #6 on the US Billboard Hot 100.

Helen Reddy’s “I Am Woman” reached number one on the Billboard Hot 100. She had two other songs peak at #1 -“Delta Dawn” and “Angie Baby”.

Burt Bacharach is considered one of the most important composers of 20th-century popular music. He has written more than 70 U.S. Top 40 hits!

“The Way You Look Tonight” was originally performed by Fred Astaire in the film Swing Time. There have been many covers but the only version to chart was by The Lettermen. However, the most popular version was recorded by Frank Sinatra.