You are here: Home1 / Music & Songs2 / Wedding Music3 / Hot 50 K-pop Songs for Your Wedding with Girl Groups and Boy Bands 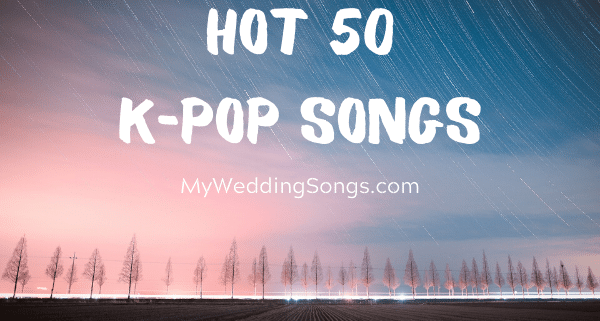 Are you looking for fun songs to play at your wedding, backyard party, or spin class? K-pop is here to get you out of the American Pop rut.

What is K-pop Music?

K-pop, Korean Pop, is a genre of music that comes from South Korea. Artists are trained in music and dance and their performances are top-notch!

Seoul’s Pop King, PSY helped K-pop hit mainstream in the USA back in 2012 with Gangnam Style (that would be a TikTok viral song today). Which K-pop songs are the best? Well, to make it easier for you, we assembled 50 of the hottest K-pop songs right now according to Apple Music charts. 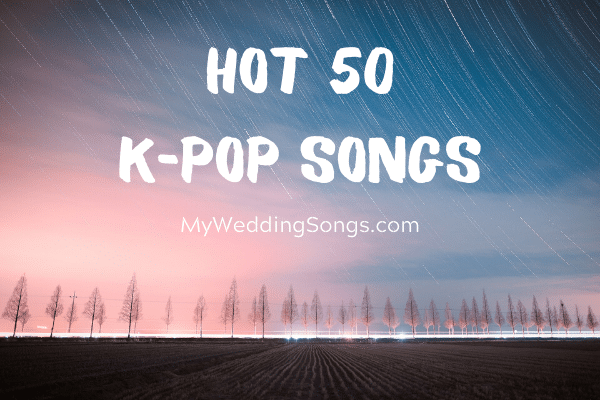 Who are some of the most popular K-pop girl groups?

Who are some of the most popular K-pop boy bands?

K-pop is short for Korean Pop Music and is well, popular, in the dance and club scene. This South Korean art form includes nods to jazz, house, rap, and R&B. Like any popular art form, it incorporates the best of any genre — you’ll even appreciate some Latin references in the rap songs. What you won’t be doing is sitting still. K-pop is way too fun!

Not all K-pop songs are sung in Korean — quite a few on our list are in English. With that said, when it comes to vetting songs for a wedding, the lyrics matter most. If you’re a DJ who isn’t fluent in Korean, you may want to vet the songs before including them at a wedding. No one likes awkward situations.

This curated list of popular downloads is perfect for any party where you want people to dance and have fun. And, honestly, if you want to get out of the rut of American Pop, then press the heart on our Spotify playlist and share it with your friends.

My Wedding Songs is a reader-supported website. As an Amazon Associate, we earn revenue from qualifying purchases. Thanks for stopping by.

If you have a song you think should be on our list, be sure to comment on it below (in English) so that we can review it to add it.