Skip to content
Home > Multicultural > 7 Best Latin Dance Songs for Weddings
My Wedding Songs is a reader-supported website. As an Amazon Associate, we earn revenue from qualifying purchases. Purchases made through links on this page may earn us a commission but also support the artists.

When it comes to Latin Weddings, dancing is when the most fun happens. Latin dance songs really know to bring life to the party. If you are looking for some amazing Spanish language songs for your wedding, these hand-picked Latin dance songs are guaranteed to get your dance floor in a frenzy. 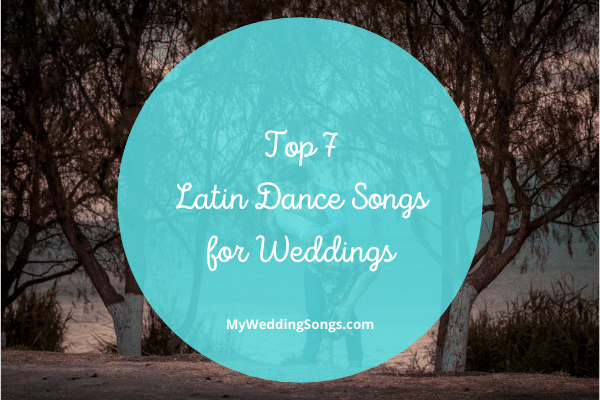 All of these songs have been tried and tested by myself at hundreds of Latin weddings in Los Angeles, San Diego, and Southern California.

Here are 7 of the best Spanish Dance Songs for Latin Weddings: (in no particular order).

Note: Check out the Top 50 Spanish Songs right now for your party too!

1. Suavemente – Elvis Crespo
1998, Suavemente
This is arguably the greatest Spanish wedding dance of all-time. It has a super energetic beat and vibe to it that makes it perfect for any wedding dance party. This is the #1 most requested dance song for every Latin wedding that I DJ at and is almost always requested at non-Latin weddings as well. This Merengue song has been the king of the Latin wedding dance floor since it was released way back in 1998.

2. Danza Kuduro – Don Omar & Lucenzo
2010, Meet The Orphans
Like “Suavemente”, this infectious dance monster is an extremely popular song at Latin weddings. Originally released in 2010, this song is a guaranteed dance floor filler. Fun fact: this song has over 1 billion views on Youtube!

3. Despacito – Luis Fonsi, Daddy Yankee, Justin Bieber
2017, Vida
This crossover smash hit was the biggest wedding dance song of 2017. You literally couldn’t go to a wedding that year (and even still) and not hear this song played at least twice. It’s has a medium-paced reggaetón beat which works super well on the dance floor. Justin Bieber’s addition to this song really helped catapult it to epic heights and made it even more appealing to non-Latin wedding crowds as well.

4. La Chona – Los Tucanes De Tijuana
1995, Me Robaste El Corazón
This song is my secret weapon when I need a song to wake a crowd up. “La Chona” is one of those songs that will give the crowd a second wind if they need it. It has a fast beat that people love to dance to. Fun fact: This Mexican band has performed at Dodger Stadium in Los Angeles and Central Park in New York City.

6. Mesa Que Mas Aplauda – Grupo Climax
2004, Za Za Za
This super-fast-paced Merengue song is a highly requested song that I play at Latin weddings. This song is also known as “Za Za Za” for its catchy hook. Although it was released back in 2004, it still sounds fresh at weddings today and never gets old.

7. Vivir Mi Vida – Marc Anthony
2013, 3.0
This track by Marc Anthony helped him win a Latin Grammy award back in 2013 when it was released. Fun Fact: This song is actually a cover version of a European song called “C’est La Vie” by Khaled. The original track came out in 2012 and is a bilingual song featuring Arabic and French vocals. Both the original and Marc Anthony versions are massive songs that get played at weddings around the world.

Well, there you have it. 7 amazing Spanish songs ready to rock any Latin wedding. See you on the dance floor!

If you have a favorite Latin song not on our list be sure to mention it below as a comment!

DJ Kamayo is a Los Angeles based wedding DJ with over 20 years of djing experience. He has DJ'd over 1000 weddings and has been djing 150+ events every year since 2006 including weddings, nightclubs, bars & birthday parties. When he's not djing private events you can catch djing at the Victorian in Santa Monica (a popular 3 level bar/nightclub) where he is the music director and resident DJ. What makes Kamayo an in-demand DJ in Southern California is his attention to detail and his passion for music & djing.