Top 50 Spanish Songs For Your Party or Wedding 2022

Updated on November 28, 2022 | Written by Matthew Campbell (Editor of My Wedding Songs and veteran DJ)

What Spanish songs should I play at my wedding?

The Latin chart repeatedly ranks party bangers that have made their way into Pop culture such as “Despacito,” “Mi Gente,” “Macarena,” “Suavemente,” and “Danza Kuduro.” So, our list has a wide variety of sounds, moods, and use cases. Basically, when you remove the ceremony, a wedding is a party. So, get your groove on, pick your partner, and get to dancing! 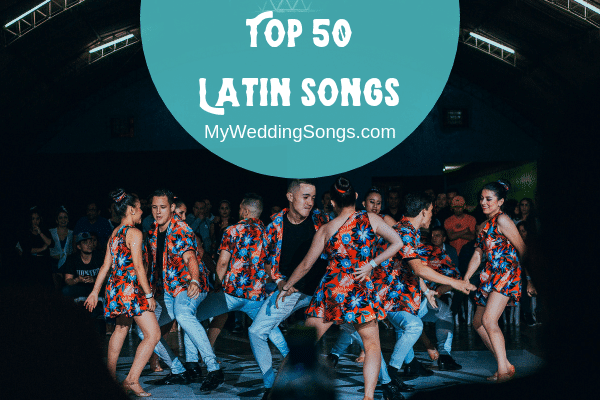 What are some Spanish ballads?

(As calculated by Amazon’s streams & purchases)

It’s hard not to pick all of the songs, once you listen to the lyrics or hear the beat. If you know a song that you think should be on our list, be sure to let us know!

Leave a comment so we can add it to the list. Be sure to check out our other cultural song lists.

Is Latin music its own genre?

Latin music is a wide tent. It isn’t its own genre unless some of the curators are lazy. We tend to think of Latin music as only songs in Spanish. But they could also be in languages from the Caribbean or Portuguese. Brazil 66 anyone?

Latin music is a genre of music labeled by the music industry that has a representative sound and style of the native music from Central and South America as well as the Caribbean.

Latin songs consist of many sub-genres including, but not limited to:

There are two songs in Spanish that we encourage you to listen to first. “La Suite del Reloj” is a beautiful instrumental. “White Lily” is performed by Spanish artists and mixed in Mexico but the lyrics are in English.

With that in mind, Luis Miguel, El Sol de México, sings “El Reloj” which is perfect for a first dance. The lyrics are amazing. “She’s the star that lights my being.” Wow.