You are here: Home1 / Wedding Song Lists2 / 90 Best Reggae Songs For Your Wedding

Reggae is one of the tried-and-true ways to get people out of their chairs and onto the dance floor. This is one of the reasons we love it. Reggae is the result of cultural fusion and post-war messaging. As a genre, it defines what we think of as “chill” in many ways. 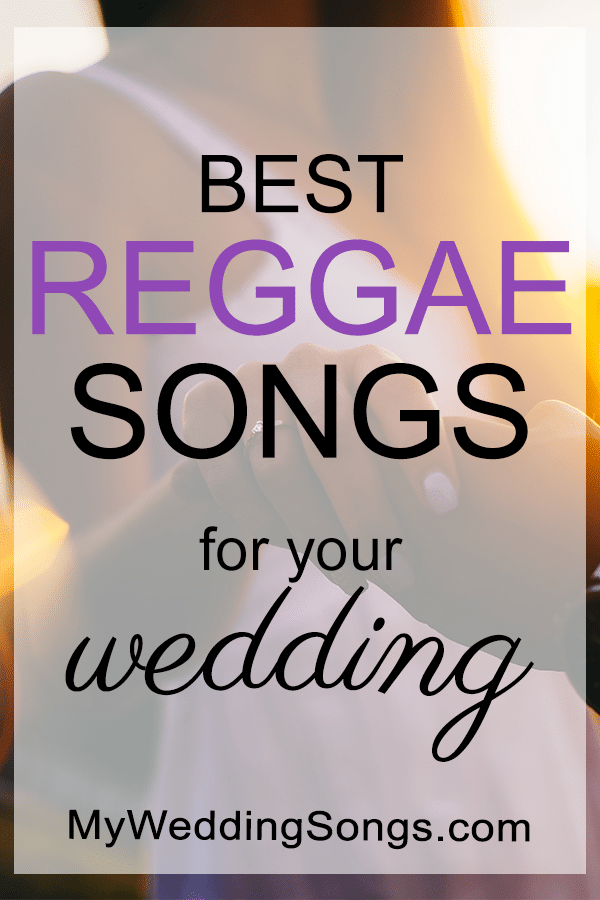 What is Reggae Music?

Reggae music can be split into two sub-genres: reggae and dancehall. Reggae is slower-paced than ska but faster than rocksteady and Dancehall is a faster dance/pop tempo style. Some of the contemporary music styles have received an international appeal to be featured on many Global Top 40 playlists.

“Characterised by the fusion of European and African traits, with origins in enslaved work songs – created with guitar, rumba box, bongo and banjo, Mento mixed this with satirical lyrics of everyday life and verse repetition, creating a foundation from which reggae would blossom.” BBC

Calypso is A Distinct Musical Genre

A clear distinction we want to make is that many times Calypso/Soca music is usually categorized as Reggae music; which it is not. Those genres originate from Caribbean islands such as Trinidad and Tobago.

“Reggae is one of the tried-and-true ways to get people out of their chairs and onto the dance floor. This is one of the reasons we love it. Reggae is the result of cultural fusion and post-war messaging. As a genre, it defines what we think of as “chill” in many ways.” National Carnival Commission of Trinidad and Tobago

Sadly, many music services like iTunes and Spotify categorize that music style as Reggae. We are referring to songs like Bunji Garlin – Differentology, Kevin Lyttle – Turn Me On, Machel Montano – Fast Wine, Rupee – Tempted to Touch, etc. They are not technically part of the Reggae genre.

There are other dancehall artists who receive quite a bit of airplay, but their lyrics are unsuitable for wedding playlists unless it’s a predominantly Caribbean audience. Dancehall artists such as Assassin, Busy Signal, Konshens, Mavado, Popcaan, and Vybz Kartel are popular on the dancehall scene and have sold millions of records/albums.

Reggae is all music that has a rhythm accented with an offbeat usually on the second and fourth beats of each bar. In addition, the rhythm guitar emphasizes the third beat or holds the chord on the second beat until the fourth is played. The third beat’s speed and the use of complex bass is a signature of reggae music.

Reggae formed from ska, mento, and R&B styles of music. The biggest propitiator of reggae music is Bob Marley. Bob Marley started with the musical group the Wailers promoting the image of the urban guerilla. Bob’s stardom peaked when he converted to a more soulful-pop melody sound in the early 1970s.

(as downloads on Amazon)

Special Thank You To DJ Curtis

Thank you to Jamaican DJ Curtis for helping us assemble our list. We appreciate your efforts to share your knowledge. DJ Curtis is an avid music lover who loves to share his passion. In his spare time, you can find Curtis spinning the best tunes at a local Tri-State (NY, NJ, CT), national, and international events.

Curtis has made guest appearances on several local radio stations infecting eardrums over the airwaves. His love for music and for providing top-level entertainment services has opened his clientele spectrum to include corporate and private university events. Curtis enjoys playing at milestone birthdays, weddings, retirement, proms, and other special parties. You can contact Curtis at (917) 776-8487 or jamecho[at]gmail.com.

Did we miss your favorite song? Let us know in the comments.

12 responses to “90 Best Reggae Songs For Your Wedding”