You are here: Home1 / Ceremony & Reception2 / Popular 1950s Songs for Your Wedding

So, you and your dreamboat are getting married?

Then why not celebrate going to the chapel with the best music the 1950s had to offer? 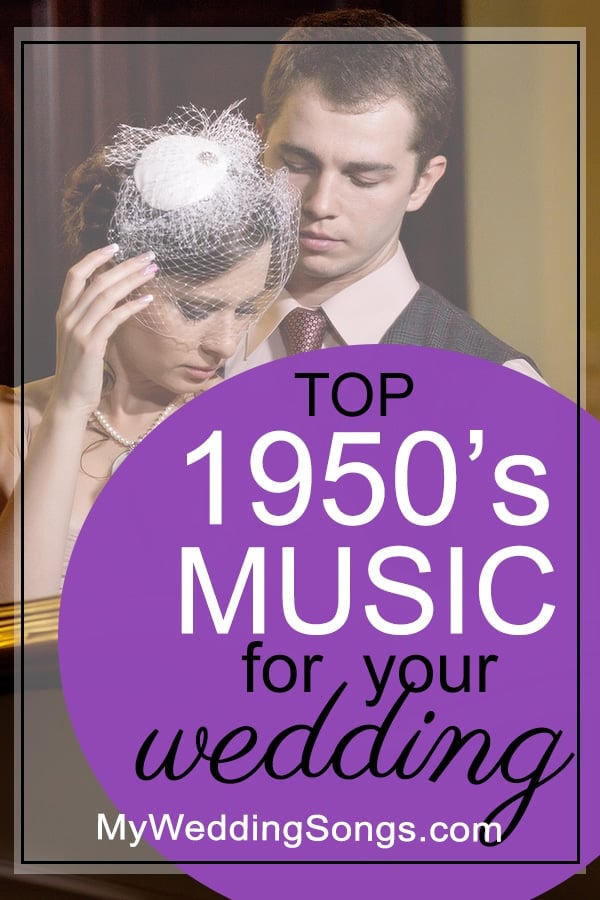 The decade that followed the end of World War II brought prosperity and, with that, fun tunes to dance the twist, and more.

Sure, the 1950s brought rock and roll which was a natural evolution from jazz.

Their parents listened to Big Band and Swing. Partner dancing just kept up its pace.

Ballads were still big in the 1950s, with such crooners as Dean Martin, Perry Como, Frank Sinatra, and Pat Boone.

So, what defines 1950s music is the backbeat, great vocals, and a memorable chorus.

We’ve talked to wedding couples through social groups and analyzed hundreds of wedding DJs’ playlists across the U.S. that provide wedding music. We selected a list just for you of the most popular and unique 1950s songs for your wedding day.

Every couple’s music tastes are different. Thus, we selected wedding songs from the 1950s that include many different genres.

Money don’t get everything, it’s true
But what it don’t get I can’t use
I need money (That’s what I want)

Come with me, my love
To the sea, the sea of love
I want to tell you
How much I love you

See the girl with the red dress on
She can do the Birdland all night long
Yeah yeah, what’d I say

Dance with me
Dance with me closer, closer and closer
And maybe we’ll be lovers when the music ends

Goin’ to Kansas City
Kansas City, here I come
They got some crazy little women there
And I’m gonna get me one

For Your Precious Love – Jerry Butler & the Impressions
1958, R&B

Just for you to say that you’ll be my girl
Wanting you, I’m so lonely and blue
That’s what love will do

At first I thought it was infatuation
But, woo, it’s lasted so long
Now I find myself wanting
To marry you and take you home

Well, it’s one for the money
Two for the show
Three to get ready
Now go, cat, go

Yes it’s me and I’m in love again
Had no lovin’ since you know when
You know I love you, yes I do
And I’m saving all my lovin’ just for you

Gosh, knows I love you
Heaven knows it’s true
I want to be near you

Spot a lady on a runaway horse
Ah-hah, that’s right, of course
Jim Dandy to the rescue

My heart’s at your command dear
To keep, love and to hold
Making you happy’s my desire
Keeping you is my goal

Well we worked very hard, both me and my wife
Workin’ hand-in-hand to have a good life

Yes, I’ll Admit I’m A Fool For You
Because You’re Mine

Jambalaya and a crawfish pie and a fillet gumbo
‘Cause tonight, I’m gonna see my ma cher amio
Pick guitar, fill fruit jar and be gay-o
Son of a gun, we’ll have big fun on the bayou

Say hey, good lookin’, what you got cookin’?
How’s about cookin’ somethin’ up with me?

Rock ‘n roll will always be
Our ticket to the end
It’ll go down in history
Just you watch, my friend

Twinkle twinkle little star
How I wonder where you are
Wish I may, wish I might
Make this wish come true tonight

Well I love, love you darlin’
Come and go with me
Come home with me
Way beyond the sea

Every time I look at you
Something is on my mind
If you do what I want you to
Baby, we could be so fine

Earth angel, earth angel
The one I adore
Love you forever and ever more
I’m just a fool
A fool in love with you

I’m gonna take two weeks, gonna have a vacation
I’m gonna take my problem to the United Nation
Well I called my congressman and he said quote
“I’d like to help you son, but you’re too young to vote”

Every man has got to have a party doll
To be with him when he’s feelin’ wild
To be everlovin’, true and fair

I got to boogie-woogie like a knife in the back
So be my guest, you got nothin’ to lose
Won’t ya let me take you on a sea cruise?

There was Lollipop with-a Peggy Sue
Good Golly, Miss Molly was-a even there, too
A-well-a, splish splash, I forgot about the bath
I went and put my dancing shoes on

‘Cause we’re really gonna rock tonight
(Tweet, tweedle-lee-dee)
A pretty little raven at the bird-band stand
Taught him how to do the bop, it was grand

Rave on, rave on and tell me
Tell me not to be lonely
Tell me you love me only
Rave on for me

Good golly, Miss Molly, sure like to ball
When you’re rockin’ and a rollin’
Can’t hear your momma call

I love you darlin’
Baby, you know I do
But I’ve got to see this book of love
Find out why it’s true

I can’t seem to stand on my own two feet
Who do you think of when you have such luck?
I’m in love
I’m all shook up

Kiss me baby
Mmmmh, it feels good
Hold me baby
Well I’m off to love you like a lover should

Keep a knockin’, but you can’t come in
Come back tomorrow night and try again

My goodness, searching every which a-way Yeah Yeah
But I’m like the Northwest Mountie
You know I’ll bring her in some day Gonna find her

You ain’t nothin’ but a hound dog
Cryin’ all the time
Well, you ain’t never caught a rabbit
And you ain’t no friend of mine

Ev’ry time that you’re near
All my cares disappear
Darling, you’re all that
I’m livin’ for
I want you, I need you
I love you more and more

Listen to me, baby
Hear ev’ry word I say
No one could love you the way I do
‘Cause they don’t know how to love you my way
You give me fever

Ooh, Miss Lotte Lenya and ol’ Lucy Brown
Oh, the line forms on the right, babe
Now that Mackie’s back in town

Put your head on my shoulder
Whisper in my ear, baby
Words I want to hear
Tell me, tell me that you love me too

I love, I love you so
Please hold, hold me so tight
All through, all through the night

I’ll be good to him, I’ll bring love to him
Everyone says there’ll come a day
When I’ll walk alongside of him

His kiss is sweeter than an apple pie
And when he does his shaky rockin’ dance
Man, I haven’t got a chance

When the night is warm, soft and warm
I long for his charms
I’d sing like a violin
If I were in his arms

Add one stolen night of bliss
One girl, one boy
Some grief, some joy
Memories are made of this

Love Is A Many-Splendored Thing – The Four Aces
1955, Pop

Since you went away the days grow long
And soon I’ll hear old winter’s song
But I miss you most of all, my darling
When autumn leaves start to fall

Backup on the Backbeat – A Little about 1950s Songs

Rock and roll music started in the mid-1950s and became mainstream with artists such as Bill Haley & His Comets and Elvis Presley. Elvis Presley became the image of Best 1950s Music. That decade made him “The King of Rock and Roll.”

Elvis ruffled the feathers of the squares after his pelvis gyrations on The Ed Sullivan Show. That kind of dancing was never shown on television before. Rock and Roll didn’t dominate the 1950s, however. Country and Western grew in popularity with such artists as Hank Williams, Johnny Cash, and Porter Wagoner. Carl Perkins fueled a new version of country and western and R&B combined called rockabilly. Arguably, there was quite a bit of crossover.

Hank Williams also helped to popularize Honky Tonk, a style of country music characterized by a style of piano playing emphasizing rhythm more than harmony. (Does this remind you of jazz? It should) It is interesting to note the “tonk” in the word Honky Tonk was taken from a manufacturer of an upright piano.

In the 1950s, we saw the popularization of television, dance shows, and even the credit card system in the USA. Although color televisions were being introduced, most shows were seen in the afternoon and evenings in black and white.

Popular TV shows included I Love Lucy, The Honeymooners, and The Twilight Zone. Segregation was also made illegal. Space travel became a reality with the Russian Sputnik 1. America also grew by 2 States with the addition of Hawaii and Alaska. That was a lot of change. Sound stressful? Yeah, dance it out.

Hot fashion trends included men’s bomber jackets (WWII), Bermuda shorts, and a nipped waist for women. In the early 1950s, there was a major advancement in medicine with the creation of a vaccine to prevent polio. So you can see, Daddy-O, why people wanted to splish splash, rock around the clock, and do the jailhouse rock.