Home > Words in the Title Song Lists > 13 Best Nite Songs – Songs With Nite In The Title
My Wedding Songs is a reader-supported website. As an Amazon Associate, we earn revenue from qualifying purchases. Purchases made through links on this page may earn us a commission but also support the artists.

13 Best Nite Songs – Songs With Nite In The Title

Nite can be spelled in different ways. The most common is the spelling as night. However, many people also spell father the day as nite also. Particularly in song titles, musicians like naming their song titles with the word nite.

Nite is a variant of night. Just so we don’t get lost n grammatical bliss, nite is actually a misspelling of night. 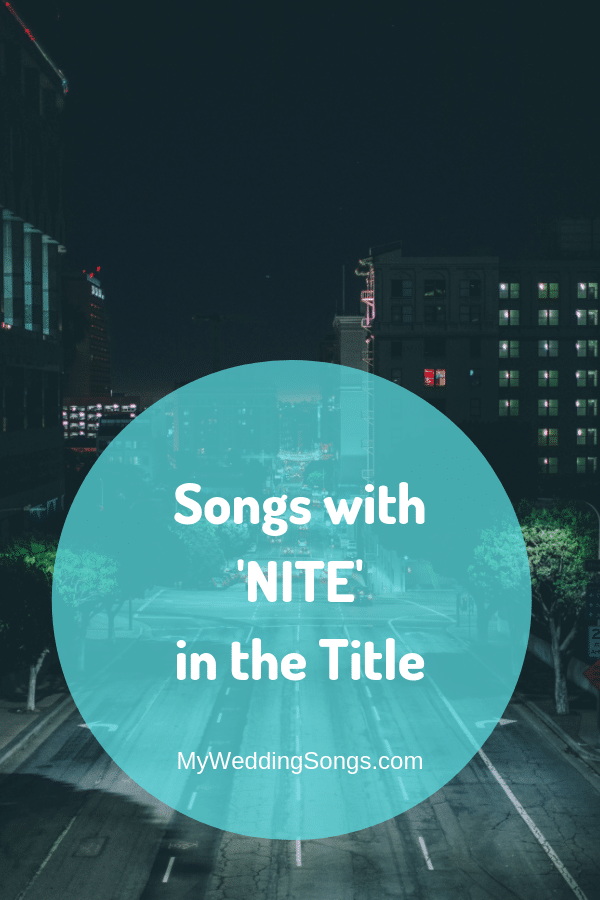 Nite is commonly used with the word late as in Late-Night drive-in or also in Late-Nite television.

Nick at Nite is one of the best stations for Nickelodeon showing shows that were very popular but are no longer on air and are family-friendly. Such shows include Friends, Full House, and Yes, Dear.

Please note the spelling of nite as we have another list of night songs.

(by popularity on Amazon Music)

Released in 2012 on the album The Smooth Side Of Soul, Genre: Jazz

Released in 2008 on the album A Kid Named Cudi, Genre: Hip Hop

Notable Lyrics: “‘Cause day and night (day and night) / The lonely stoner seems to free his mind at night”

Released in 2004 on the album Damita Jo, Genre: Dance

Notable Lyrics: “This rhythm just makes me high / I’m like a junkie / I could dance all night”

Released in 2002 on the album Unbelievable, Genre: Dance

Notable Lyrics: “Like sheep / Watch out for the wolves wolves / One night stand”

Next Up: See the list of songs with the word day in the title.

Notable Lyrics: “So I, I turned ’round / Oh, baby, gonna be alright / It was a great big lie, ’cause I left that night”

All Nite All Day – Ginuwine

Notable Lyrics: “I wanna love you, in every way / Tonight, I wanna play / I can love you baby girl if you stay with me all night”

Released in 1995 on the album Me Against the World, Genre: Hip Hop

Notable Lyrics: “I’m seeing cemetery photos of my peers / Conversatin’ like they still here / if I die tonight”

Released in 1992 on the album Cooleyhighharmony, Genre:  R&B

Notable Lyrics: “In the still of the night / I held you, held you tight / Oh I love, love you so”

If you like the nite, see our list of songs with the word moon in the title.

Notable Lyrics: “A love so good and I call it mine / Love is blind / I can tell you how I feel about you night and day”

Notable Lyrics: “Saturday night, tonight’s the night  Participate, Saturday night / What you gonna do when the night is blue / When the cloud is gone and your dream is true”

Released in 1975 on the album Dressed to Kill, Genre: Rock

In the Still of the Nite – The Five Satins

Released in 1956 on the album In the Still of the Night / The Jones Girl, Genre: R&B

Notable Lyrics: “Well before the light / Hold me again / With all of your might / In the still of the night”

If it’s dark outside, look up. See our list of songs with the word stars in the title.

Do you have a favorite nite song, not on our list?  Please share your song below so that we can add it.