Skip to content
Home > Wedding Songs by Year > Best Wedding Songs of 1981 Because You Make My Dreams Come True
My Wedding Songs is a reader-supported website. As an Amazon Associate, we earn revenue from qualifying purchases. Purchases made through links on this page may earn us a commission but also support the artists.

1981 was an amazing year for wedding songs. The year was filled with songs by Lionel Richie, Journey, Alabama, and other artists who would define one of the most powerful musical decades.

Here are the 1981 wedding songs that you will want to add to your celebration of love. 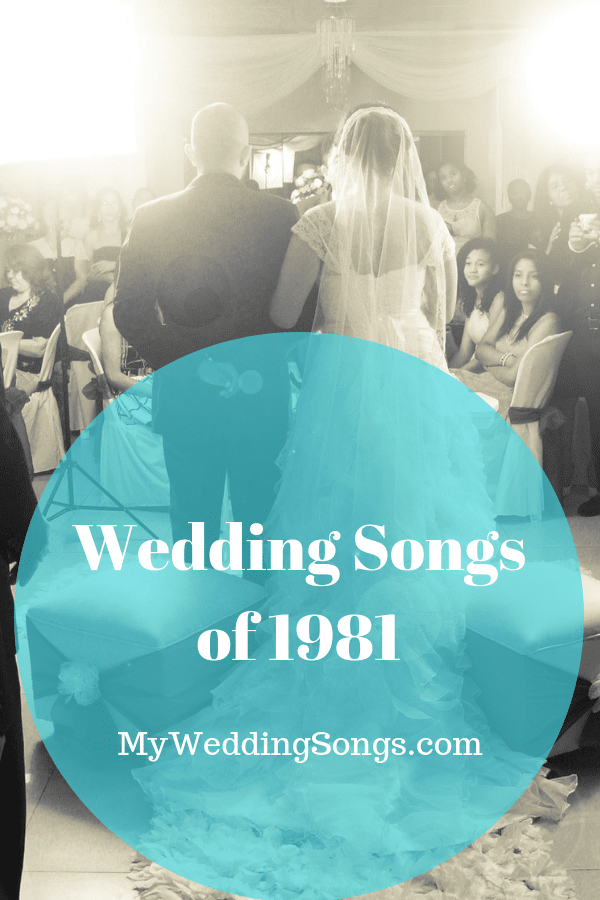 You mean the would to me
I know I know
I’ve found, I’ve found in you
My endless love

Every Little Thing She Does Is Magic – The Police
November 1981, Ghost in the Machine
Try including this song in your 80’s-themed wedding reception to get everyone up on their feet. This upbeat love song by The Police offers a great message from the groom to the blushing bride.

Don’t Stop Believin’ – Journey
June 1981, Escape
Journey‘s feel-good classic sums up the feeling shared by two lovers as they begin a life together. It is a song of hope and the determination to overcome all obstacles with the power of love.

Don’t stop believin’
Hold on to that feelin’
Streetlight, people

Lady (You Bring Me Up) – The Commodores
June 1981, In the Pocket
“Lady” is a beautiful song for the groom to dedicate to his bride on your wedding day. The Commodores hit can be played prior to the vows, and it also works very well for a first dance between the bride and groom.

Feels So Right – Alabama
February 1981, Feels So Right
If country music is your preference, this ballad by Alabama is a perfect wedding dance tune. It reflects that perfect feeling that you’ve known since finding your soul mate.

Promise me you’ll stay with me and keep me warm tonight
So hold me close and love me, give my heart a smile

Waiting for a Girl Like You – Foreigner
October 1981, 4
Did you often feel as if you would wander forever without finding true love? When you hear this Foreigner song on the wedding day you will know that your waiting was not in vain and that all your travels only served to bring you to this moment at the altar.

Slow Hand – The Pointer Sisters
May 1981, Black & White
Who can forget this smash hit from the Pointer Sisters? The bride will want to slow dance with her forever partner while this song asserts all the qualities she’s found in the man she married.

Woman – John Lennon
January 1981, Double Fantasy
“Woman” was the first song by John Lennon that was released after the artist’s tragic death. It is a beautiful ballad that expresses how a man is made complete by the woman that he has chosen to love forever.

Hold me close to your heart
However distant, don’t keep us apart
After all it is written in the stars

You Make My Dreams – Hall and Oates
May 1981, Voices
This 1981 song by Hall and Oates was featured in The Wedding Singer, and it is often found on the wedding reception playlist of couples who want a fun throwback to the ’80s. Sometimes you just want to dance to a fun tune that captures all the emotions of the day.

Step by Step – Eddie Rabbitt
July 1981, Step by Step
Remind your wedding guests of all the things he did to win your heart with this country song by Eddie Rabbitt. It will also remind you of how much effort your new husband invests in loving you as you deserve to be loved.

For your eyes only, the nights are never cold
You really know me, that’s all I need to know

Sweet Baby – Stanley Clarke
1981, The Clarke/Duke Project
This beautiful jazz song from Stanley Clarke and George Duke is a nice change of pace for the wedding reception. It can be used to precede the wedding toast or the cutting of the wedding cake.

Sweetheart
Who loved you from the start
Yeah, baby
Who treats you like a star

The ’80s was a decade filled with one-hit wonders, and Franke and the Knockouts joined that class with this song. It’s as pure as they come with the synthesizers and harmonies that define 80’s hits, and the song merits a place on the reception playlist.

How ‘Bout Us – Champaign
January 1981, How ‘Bout Us
Those who prefer R&B classics from the ’80s can easily work this song into a wedding celebration. Let it play during the seating period or as the wedding party precedes the bride to the altar.

Some people are made for each other
Some people can love one another for life, how ’bout us?

I Love You – Climax Blues Band
February 1981, Flying the Flag
This simple declaration of your feelings is a song that the bride and groom can dedicate to one another as they stand before the altar. It was a hit for the Climax Blues Band, and the lyrics are still relevant for a new generation of lovers.

Thank you, babe, for being a friend
And shining your light in my life
‘Cause, oh, I need you

Rapture – Blondie
January 1981, Autoamerican
Blondie had their share of 80’s hits, and “Rapture” was one of the best. It’s a sultry ballad that speaks of the passion newlyweds have for one another, and it is best saved for that moment when you prepare for the reception send-off.

A Woman Needs Love (Just Like You Do) – Raydio
February 1981, A Woman Needs Love
Raydio delivered this pop classic that features the vocals of Ray Parker, Jr. and a feel-good dance vibe. Any groom would find it to be a nice choice for that first dance with the bride.

Just the Two of Us – Grover Washington and Bill Withers
February 1981, Winelight
Bill Withers is never a bad choice when it comes to wedding music, and this hit is often found among the dance music choices at a wedding party. Today and forevermore it is just the two of you, and the song reminds you to let nothing divide the unity you have created.

If you have a favorite wedding song released in 1981, not on our list, be sure to comment on it below so we can add it to the list. We do read and respond to all comments.

Celebrating wedding songs of 1981. Where were you and what was happening?

Congratulations on your wedding of 1981. You share your anniversary with the following events.

Learn more about 1981 on Wikipedia. Thank you for visiting our page – wedding songs of 1981.