Skip to content
Home > Wedding Music > The Superhero Wedding Musical Utility Belt
My Wedding Songs is a reader-supported website. As an Amazon Associate, we earn revenue from qualifying purchases. Purchases made through links on this page may earn us a commission but also support the artists.

When you met, one of those million and one discoveries of things you both had in common was a love for superheroes. Marvel, DC, Dark Horse, whatever the company behind these tales of modern mythology, you found a bond in your love of the costumed crusaders. 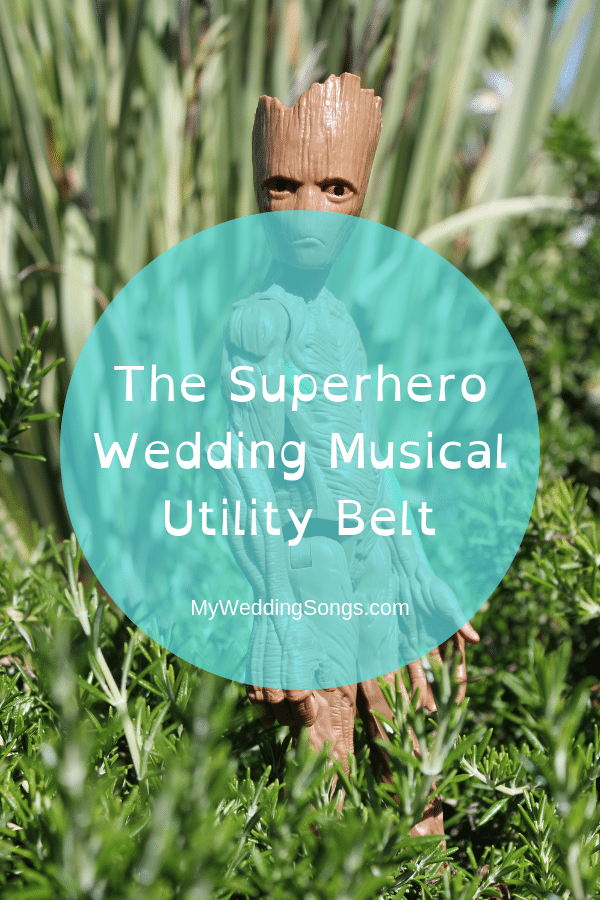 The groom identifies with The Incredible Hulk and Captain America. The bride sees in herself the building blocks of Wonder Woman and Black Widow. For Halloween, you both dressed as Spiderman and Spiderwoman and you didn’t even talk about it beforehand.

Why not theme your wedding to reflect your belief that you two are the superheroes you were looking for, the heroes you both deserved?

She’s a hard-nosed pragmatist. He’s a bit of a boy scout. You both are just a bit old-fashioned in your tastes and he can see right through her. No question, the amazing John Williams’ soundtrack to Superman the Movie is the way to go.

Seating of the Family
“Leaving Home”

Poignant, beautiful, and just a bit sad, your family can walk down the aisle and get ready for the waterworks like Jonathan and Martha Kent sending Kal-El off to the big city.

As soon as this theme starts, the hairs on the backs of your guests will raise and when the bride strolls out to this extraordinary trumpet fanfare, she’ll figuratively fly up to the
alter.

Lois wonders “Can you read my mind?” and the two of you are so in sync with one another, sometimes it seems that way, doesn’t it?

Close it out the way it began. You’ve turned back time by spinning the globe backward and your wedding was majestic. Why not walk out of the room with majesty in tow?

Neither of you is from another world and yet you both seem to have your own set of mutant powers. This Henry Jackman score will surprise and thrill you.

Seating of the Family
“Cerebro”

Whether you agreed on how Avengers: Endgame” played with time or not, you both agree that Steve Rogers deserved that back in a time love story. Show your solidarity with Cap and his Howling Commandos by throwing on your uniforms and battling Hydra in holy matrimony!

Seating of the Family
“Farewell to Bucky”

Recessional
“Captain America ‘We Did It!'”

Maybe your superpowers are rooted in your ethics and courage rather than either a super-soldier formula, a genetic mutation, or the yellow sun of the Earth. Kickass was just a kid who believed he could be a superhero and you are just a couple of kids with bravery and a willingness to face anything together. And you both kick-ass, right?

Seating of the Family
“Fatherly Sacrifice”

Of the many incarnations, the only Fantastic Four movie made to date worth it’s salt is Pixar’s The Incredibles, am I right? A marriage based upon strength, flexibility, and flame retardant clothing, there won’t be a single person in the church that doesn’t thrill to this 1960’s style score.

Seating of the Family
“A Whole Family of Supers”

Guardians of the Galaxy (Various composers)

When you look at your wedding party, you see a band of misfits with no love of planning but the pluck and luck of the slightly deranged belief in themselves and you. This theme can also carry over into the reception because there are three Awesome Mixes that Star-Lord plays on his cassette tape player and these mixtapes are rad!

Seating of the Family
“Come and Get Your Love”

Processional
“Is This Love”

Recessional
“You’ve Made Me So Very Happy”

You are superheroes. You’ve chosen to face the road of life as a super team with a sense of truth and justice. Get hitched like a couple of masked avengers and fly out of there with as the alter egos you both know you are!

Listen to our best superhero songs playlist on Spotify.

If you have kids at the wedding, not only can you pay homage to superheroes, but you can also play a wedding game for everyone’s entertainment.