You are here: Home1 / Music & Songs2 / Wedding Planning3 / Unearthing the Origins of Nuptial Bliss: Our Most Beloved Wedding Trad... 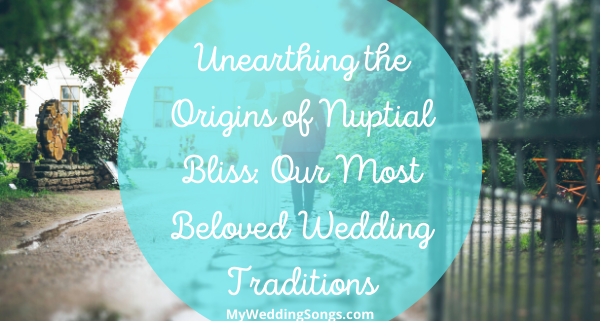 Many of the wedding traditions we still include in the modern nuptial festivities have their roots deep in history. Though many of these wedding traditions are based on superstitions or historical necessity, to this day couples still – to some degree – acknowledge them. Though the dynamics of weddings change continuously, with new wedding customs being added to the ‘canon’ all the time, wearing white, tying cans to the bumper, and carrying a bouquet all remain firmly entrenched in the collective psyche.

Unearthing the origins of our most beloved wedding traditions – from the practice of placing wedding bands on the third finger of the left hand to putting coins in the bride’s shoes – helps modern brides understand why we continue to do things the way we do. 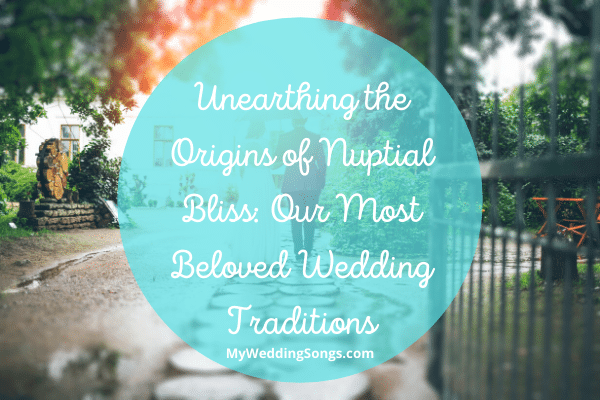 A Vision in White

“Married when the year is new, he’ll be loving, kind, and true.
When February birds do mate, You wed nor dread your fate.”

One of our most beloved wedding traditions is the white wedding dress. Many historians claim that the vivacious French queen, Anne de Bretagne, was the first to start this most cherished of wedding traditions by wearing a white wedding dress in 1499; however, there remains some speculation as to the veracity of this claim. Another 160 years would pass until accounts of Mary, Queen of Scots’ marriage to the French Dauphin in 1558 also claimed she wore white. In most cases, the white wedding dress is commonly attributed to Queen Victoria of England, however, who in 1840 married Albert of Saxe-Coburg, clad entirely in a white gown that was adorned with some of her own prized white lace. But, as far as wedding traditions are established, it still took a while for brides to catch on to this new idea; it was, after all, very hard to clean a white dress and keep it that way in those times. Another sixty or so years would pass before brides had the resources to wear white wedding gowns routinely and keep them spotless.

Prior to this time, there were no wedding customs that dictated what color had to be worn, and everyone – from peasants to royalty – would simply wear their finest gown, whether it was blue, purple, or yellow-hued. The only colors strictly off-limits were black (a symbol of death) and flaming red (often associated with ‘ladies of the night.’), although brides in certain parts of the world wore (and still do) black or red gowns based on local cultural and social wedding customs and requirements. Nowadays, people think that a white dress stands for chastity, but traditionally, if a bride wanted to convey this fact, she would have worn blue in keeping with long-held wedding traditions.

All You Need Is Something Old, New, Borrowed, and Blue

“If you wed when March winds blow, joy and sorrow both you’ll know.
Marry in April when you can, joy for maiden and for man.”

Another favorite of our modern-day wedding traditions – the practice of integrating ‘something old, something new, something borrowed, and something blue’ – has been a part of the marriage ceremony since the nineteenth century, each standing for a special trinket or symbol the bride carries with her on the wedding day. Most people are unaware of the last line of this phrase, however, which ends with ‘and a silver sixpence in her shoe.’ Many cultures practice putting coins in the bride’s shoes, symbolic wedding customs that stand, of course, for wealth and prosperity. In Sweden, for instance, these wedding customs are evident with the mother of the bride placing a gold coin in one shoe and her father placing a silver coin in the other to ensure that she will always have financial security.

‘Something old’ stands for the bride’s old life; wedding customs generally state that she should pick something that reminds her of a loved one (perhaps a grandparent) or past special event. ‘Something new’ signifies the couple’s hope for their future together; a symbol of shared interest is an excellent choice. ‘Something borrowed’ represents something the bride wishes to aspire to or someone she wishes to honor, whether it be a loved one’s old bracelet or a memento from a friend who has a happy marriage. And finally, the ‘something blue’ part of these wedding traditions, though it no longer holds the same symbolism, denotes the bride’s purity. Many brides today incorporate the color discreetly underneath their dresses in the form of garters or as jewelry.

The Vein of Love Links Both Hearts

“Marry in the month of May, and you’ll surely rue the day.
Marry when June roses grow, over land and sea you’ll go.”

With its circular shape, the wedding ring, which for years has been a part of our most respected wedding customs, represents love without end and the moment when the bride and groom are joined together. Placing the wedding ring on the third finger of the left hand is usually believed to have come from the ancient Egyptian belief that this part of the body contained the ‘vein of love,’ or a mythical vein that runs from the finger to the heart. With the wedding ring on this finger, another of our most beloved wedding traditions concluded that happiness, love, and commitment were assured.1

Early folklore of how our wedding customs came to claim that the husband would tie his new wife’s ankles and wrists with ropes to keep her spirit on earth for as long as possible; this particular practice stemming from these ancient wedding customs, of course, evolved into today’s modern wedding bands, now made from gold or silver, though the transformation took many forms throughout the years – hemp (which never lasted long), leather, metal, and other durable materials, such as iron (favored by the Romans) to indicate the permanence of the union.

Across the Threshold, We Go

“Those who in July do wed must labor for their daily bread.
Whoever wed in August be, many a change is sure to see.”

There are at least four explanations why the groom is expected to carry his bride over the threshold, all of which have their origins in wedding customs of centuries past. Well over millennia or so ago, it was common for the groom to abduct his bride (with the help of his ‘best man’), and essentially, he had to force her into the home. To make the situation easier, he likely carried her across the threshold so she couldn’t escape. Similarly, the belief in evil spirits was rampant, and to protect the couple from harm, popular wedding traditions held that the groom carried her over to leave the potential threats outside.

Another feasible explanation for these wedding traditions rests with the new wife‘s reluctance to enter the home and leave behind her family, and with a show of modesty for her husband, the bride would play hard to get, requiring the groom to carry her over the threshold so she entered the home. The last, perhaps most common account of lifting the bride over the threshold is that she must never trip or fall or she’ll suffer years of ill-fortune. But regardless of where you go, these wedding traditions still stand for the passage of one phase of life to the next and the hope that the bride and groom have for their future together.2

Look at Us and Wish Us Well

“Marry in September’s shrine, your living will be rich and fine.
If in October you do marry, love will come but riches tarry.”

A long time ago, as a bride was ready to depart with her husband from the marriage ceremony, wedding customs dictated that she should hand her shoes to her father who, in turn, would hand them to her husband, a roundabout way to show her allegiance to her father, who passed on her care and keep to the groom. In the sixteenth century, local wedding customs dictated that newly married English couples should have shoes thrown at them, and it was a good omen if they were hit. To keep these wedding traditions alive, the bridal party now ties shoes to the bumper of the couple’s car along with various other decorations, such as ‘Just Married’ signs or tin cans that are meant to scare away the evil spirits.

Wedding traditions associated with loud commotions to keep the spirits away have their origins in Medieval Europe when the wedding guests would leave the ceremony and make enough noise with bells, whistles, and pots to frighten the spirits and keep them at bay, ensuring a happy future for the new couple.

“If you wed in bleak November, only joys will come, remember.
When December snows fall fast, marry and true love will last.”

It’s common knowledge that it’s bad luck for the groom to see his bride on the wedding day before the ceremony, as far as wedding customs go. Marriages were frequently arranged a long time ago, a deal between the bride’s parents and the groom’s used to gain alliances, more power, or greater wealth. Until the ceremony, local wedding customs prevented the bride and groom from meeting in person. To prevent the groom from leaving once he saw her (if she was, in fact, unattractive), he was not allowed to speak with her until after the ceremony was finished.

Wedding customs also required that the bride was also required to wear a heavy, thick veil (just in case) and it was only lifted after the ceremony. And, at that point, the groom could no longer back out from his commitment. Many modern brides still incorporate these two wedding traditions; it, of course, lends to the excitement of the day, keeping her groom anxious to see how beautiful she looks when she walks down the aisle.

And Other Wedding Traditions, Customs, and Oddities Still in Practice

There are literally hundreds of other wedding traditions, customs, and superstitions that make up today’s marriage ceremony, and some are quite odd. In certain areas, kissing and/or running into a chimney sweep, dove, or black cat is good luck while sewing your own wedding dress is bad (for every stitch, you’ll shed a tear). Regardless of which wedding customs you incorporate into your special day – from the old to the new – the origins of each are steeped in history, and though they’ve morphed, they still equate to the celebration of love in many diverse ways.

Cherie Johnson blended her love of weddings with a business model to start Creative Wedding Favors, the premier site for a customizable anniversary, baby and bridal shower, graduation, quinceañera, and wedding favors. Her wedding ideas have also benefited readers of many websites, including Women Of, Wedding Lenox, and The Wedding Guide. Before establishing Creative Wedding Favors, Cherie worked as a professional wedding photographer, capturing all the special moments of the nuptials and ceremony. Visit CreativeWeddingFavors.com to find fun, festive favors for any event.