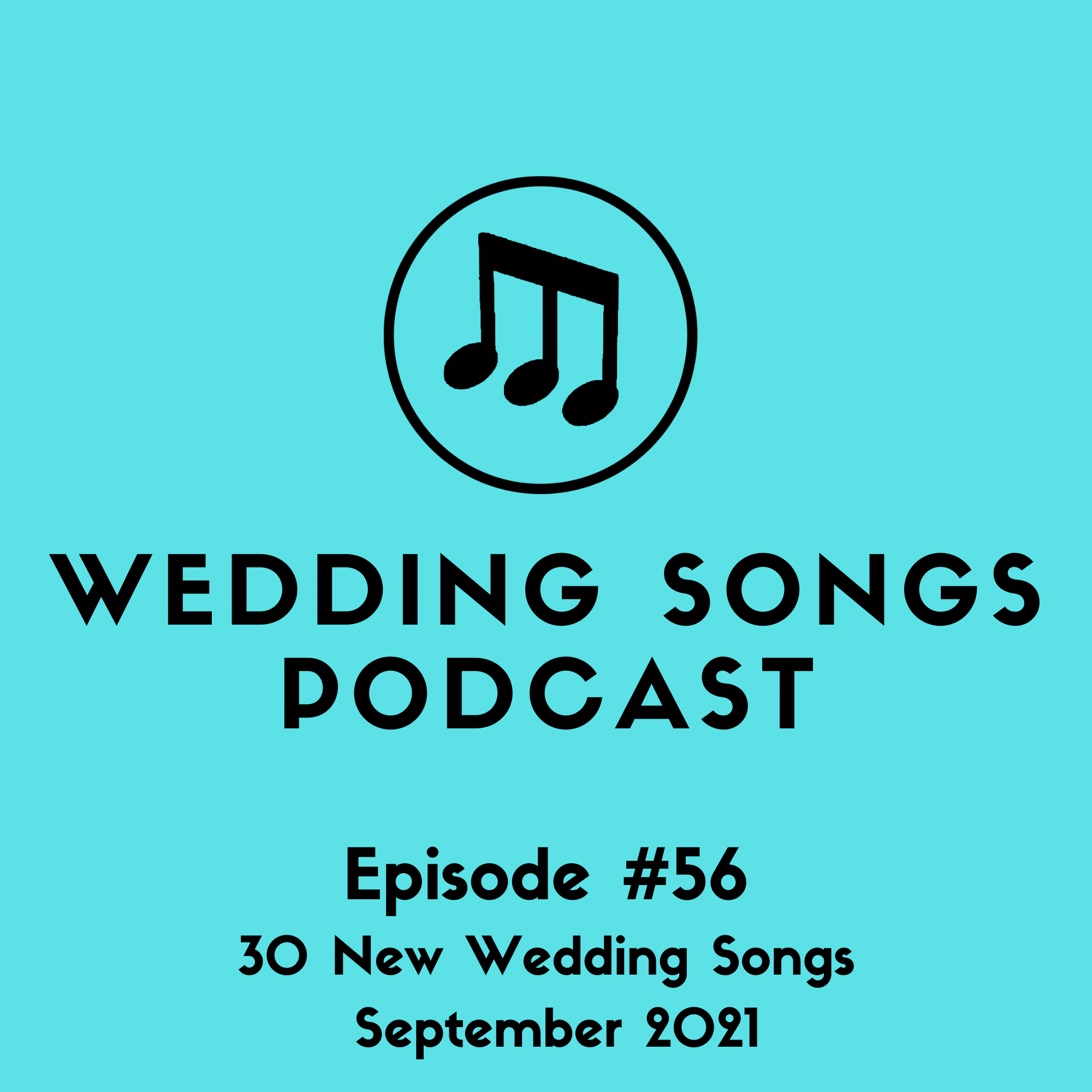 Matt talks about the new wedding songs released in September 2021.  Get some fun facts about artists and the songs too!

Welcome to the Wedding Songs Podcast featuring newly released songs you need to know and the tried and true classics. Get song ideas from the time guests arrive to the last dance of the reception. And now your host, Matt Campbell founder of MyWeddingSongs.com.

Hello everybody, thank you for tuning into the 56th episode of the Wedding Songs Podcast. I am Matt Campbell and today I am going to be talking about 30 brand new songs that were released in September 2021 that would be perfect for your wedding day. Just for those first-time listeners, I am going to go thru all of those songs released in September of 2021 in chronological order starting with September 1st and working our way to the 30th. If you have any questions about any of the songs, you can reach out to me. If you prefer to listen to the list, or read the list, you can do so on our website by going to MyWeddingSongs.com. Then go to charts and new songs.

Let’s go ahead and get started with the first song on our list. It is by Billy Strings and is called “In The Morning Light”, released September 1st. This is a great, emotional, Folk love song just for those romantic folk fans, and one that you can incorporate into your ceremony or reception. Next up is the Police legend Sting, with his new song “If It’s Love” also released on the first. This is a mid-tempo song you could have throughout your cocktail hour or during dinner. Next up, released on the 2nd, is the Disco legends ABBA with “Don’t Shut Me Down”. This is a great dance tune that you could mix in with “Dancing Queen” or “Take A Chance On Me”. It is a wonderful modern song, or you know what? You can even play it with modern Disco hit makers like Dua Lipa and The Weeknd. The next song was released on September 3rd and is featured in the movie Dear Evan Hanson. It is called “Only Us” by Carrie Underwood and Dan & Shay. It is a beautiful love story that you could accent any part of your wedding story.

Next up is the duo Caleb and Kelsey with their remake of “Unconditionally” which was first released by Katy Perry. This is a great ceremony song that you could have as guests are coming in, or even as a processional or recessional song during the ceremony. Next up is a blend of Indy Rock and Country with “C’est La Vie” by the Surfaces and Thomas Rhett. This translates into “That’s Life”. This is a song that you could play during cocktail hour that is a mid-tempo song that will have everybody singing along. They will be thinking about being on the beach sipping on your featured drink. Also released on September 3rd is “Acapulco” by Jason Derulo. This is a great R&B party hit that should fill the dance floor. Released from the movie Shang-Chi, is the Anderson Paak song “Fire In The Sky”. This is an R&B mid-tempo song that you could play that would bring many soulful grooves into your wedding reception.

Released on September 3rd is my favorite Christian song on the list by Chante Moore called “Right One”. This is a blend of Christian and R&B music that makes for a great recessional song. Also released on September 3rd is Jesse McCartney’s song “Party For Two”. This is a mid-tempo Pop love song that you could play during your wedding reception. Released from the musical movie Cinderella, which features Camila Cabello and Nicholas Galitzine, as a remake of Ed Sheeran’s “Perfect”, is called “Perfect (Reprise)”. I really like this song as a first dance song because it is just over a minute so it is not a very long song. But, it is a great love song that many couples choose to have as their first dance. This is just a shorter version of Ed Sheeran’s song. Speaking of Ed Sheeran, released on September 9th is his new mid-tempo song “Shivers”. This is a great song that you could have during the cocktail hour, or even as a dance song filler if you have the right remix. It has the right message for wedding receptions. Indy/Country artist Tyler Tisdale released his new song “She’s The One”. it is a really soulful song that blends into soulful Country and Folk. It is one you could have as a first dance with your new partner, or as a romantic song to play during the unity ceremony. Next up, released on September 10th, is Mitchell Tenpenny’s new song “I Can’t Love You Anymore”. This is a romantic Country wedding song that you could have as your first dance, or any part of your reception, including cutting of the cake, or even as the last dance song.

If you want to have a special dedication to all of the people who are attending your wedding, then the next song “Calling All Angels” by Chelsea Cutler and Quinn XCII is the song to play. You definitely have to listen to the words because it has the message of wishing everyone well. Not specifically for same-gender weddings, but the next song by Troye Sisan is “Angel Baby” which was released on September 10th. It is a great love song that you could play for your wedding reception. The next song, also released on September 10th, is a remake because Tai Verdes brought in 24K Golden for his hit song “A-O-K”. You know “A-O-K” is a great sing-along song during your reception that you could play during dinner for your Indy/Rock fans. This is a great song that the younger generations will know and sing along to. Jojo released her new Folk love song, “All My Love” on September 10th. It is one that you could play during your wedding ceremony or reception. Make sure you give that a listen. If you are looking for a fun R&B party song, make sure you check out Chloe’s new song “Have Mercy”. This will definitely be a floor filler for the R&B fans that are there at your wedding.

The next song is a great unity song that you could play during the wedding ceremony. It is called “Ritual” by Chadwick Johnson, released on September 17th. He is in the singer/songwriter genre but it is a great song that you could have for the lighting of the unity candles, sand ceremony, rope tying ceremony, or whatever the unity gesture you have during your ceremony is. Next up is another Country love song called “Made” by Spencer Crandall, released September 17th. It is a great Country love song that you could even have as your processional song because the song has a great message of love. Lukas Graham released his new song “Call My Name” on September 17th. This is a song that you could have as a parent-child dance song. Meaning for the Father-Daughter or Mother Son dance. Make sure you check this out if you are looking for a combination song, or even if you are just looking for a new Pop song you can play for those special dances at your reception.

Lil Nas X released another song that is going to be a great party song. It is called “That’s What I Want”. I really love this song from his new album Montero. This is going to be another one of those dance floor fillers that will have everybody singing along and dancing. Taylor Swift re-released one of her original songs “Wildest Dreams” but it is Taylor’s version. The original song was first released in 2014 and peaked at number 5 on the Billboard Hot 100. It is a great song that you could play during dinner for all the Swifties that are there. Another great Folk love song was released by Jasmine Chadwick titled “Love You” and it would make for a wonderful wedding ceremony song as a recessional or processional song. Just a great wedding song that you could play during your wedding ceremony.

If you are into romantic Pop songs, then Elton John and Charlie Puth teamed up with the song “After All”. It is a great song that you could play during any part of your wedding day. Talking about teaming up, two mega groups, Coldplay and BTS joined together with their new song “My Universe”. I actually got to see Coldplay at iHeart Radio and they did a fantastic job. They are definitely one of the best Rock groups that are around right now. You could play this song as guests are entering your reception venue. Everyone will recognize the voices of Coldplay and BTS.

The next song was first released by Len back in the 90s, but “Steal My Sunshine” was re-released by Portugal The Man and Cherry Glazerr on September 24th. This song could be played during dinner because it will have everybody singing along. If you prefer the Len version, you could play that one as well because 90s music is very hot right now.

If you are into EDM music, then released on September 24th is “How Will I know” which features of course Whitney Houston, but it was remade by Clean Bandit as an EDM hit just like Kygo did with “Higher Love”. It was actually first released by Steve Winwood. The last song that we have released in September 2021 you definitely want to add to your wedding playlist. It is “Big Energy” by Latto released on September 24th. This is going to be a bold prediction but I am going to say that this is going to be a must-play Hip-Hop party song at weddings. I really love the vibe and it actually samples “Fantasy” by Mariah Carey.

So, there you have it, 30 New Wedding Songs that were released in September 2021. If you prefer to read the list, or listen to the list, you can do so on our website MyWeddingSongs.com. Just go to charts and then New songs. In two weeks make sure you listen again because I am going to be releasing a new episode of the Hot 50 Wedding Songs of October 2021. Make sure you tune in for that. Thanks for listening and have a great day. 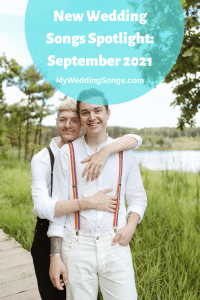 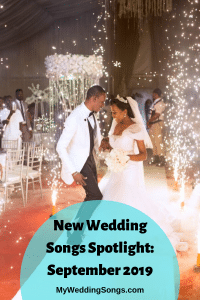 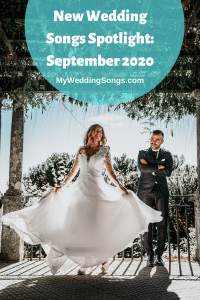 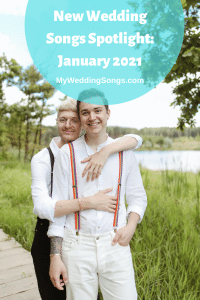 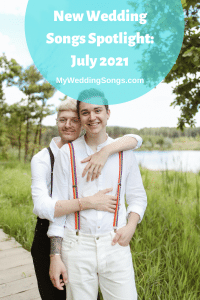