Skip to content
Home > Wedding Music > 8 Wedding Processionals from the Movies (Cinematic Majesty)
My Wedding Songs is a reader-supported website. As an Amazon Associate, we earn revenue from qualifying purchases. Purchases made through links on this page may earn us a commission but also support the artists.

Anyone who has ever married in a ceremony knows that marriage is for the two of you but the wedding? The wedding is for your family (especially the Mother of the Bride).

Mom wants this wedding to be grand on the same scale as a Royal Wedding and tends toward the trappings of Buckingham Palace on a buffet. But the two of you got together over your love of movies. Your litmus test was that you had to watch each other’s favorite movies and, if there was dissent, there was no third date, right?

One of you had to watch Yorgos Lanthimos’s Dogtooth and the other had to watch Sly Stallone’s Rocky and then you had an all-night-long conversation about movies you remember from childhood, films that you watch over and over and anytime the edited version pops up on cable. In that desire to find connection beyond the chemistry and thoughts on children, it was movies that cemented the bond.

Why not take a piece of that and declare it to the world with the perfect movie Bridal Processional? Pick the right one and Mom won’t even notice! 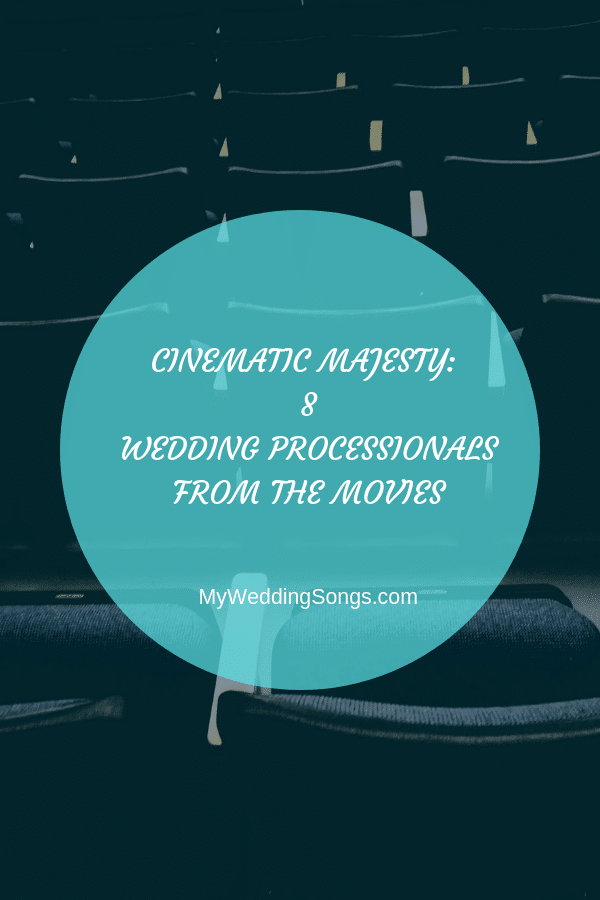 Here are the eight perfect movie processionals guaranteed to be opulent and majestic while still letting you wink at one another across the aisle.

This lush theme starts slowly and features a soaring melody that is both recognizable but not. It also sounds equally solid on either a recording or an organist. With a huge swell at around the 2: 00-minute mark, this is for weddings with a smaller party but a bride who wants to take her time down that stroll. Trust me, if played right, your going to
get more pictures of that walk than you ever imagined and the tears will flow like your train.

Simple, rustic, and beautiful, Santaolalla’s score has a Country feel and can easily be performed by an acoustic ensemble of a few guitars. If you want that unusual and comforting processional with that smaller feel, there isn’t a better piece to take the aisle to and your mom will weep like you just died.

Theme from The Mission (Ennio Morricone)

This is one of my favorites. Done by a small chamber group of woodwinds it works, done by an organist it works, done by a small orchestra with a choir it works. This one is haunting and majestic. Just the solo, in the beginning, will remind your party of the voice of holiness. The mothers walk down to that and then the wedding party promenades at around 2:30. Wait for it. Be patient. At 5:20, the choir joins in and this is when the bride appears. By the time the end starts to crank, it is an audible feast that will make your opening ceremonies set the stage for a wedding to remember. Your younger sister will hate your guts later.

Cadillac of the Skies from Empire of the Sun (John Williams)

Classic John Williams but not as easy to spot as something from Star Wars or Superman and not as depressing as something from Schindler’s List. It does sound better with a boy choir but I don’t expect you’re going with that option. This one works as well with piano and flute as it does with organ and trumpet (with a straight mute, of
course).

To The Edge of the Earth from The Piano (Michael Nyman)

This piece takes its time but has some incredible peaks and valleys perfect for that opulent procession of rented tuxedos and dresses your bridesmaids will never wear again. The recording is of an orchestra but an organ arrangement of this is quite lovely and will have your Mom scratching her head as she tries to figure out which Royal was married using this.

Shorter than most, at 2:29, it is playful, fun, and will be the perfect musical accompaniment to the couple filled with laughter and whimsy. I mean, it’s from Wall•E, how could it be anything but smile-inducing and romantic. Especially if the two of you are robotically inclined.

Use the Escala arrangement for this one. It’s truly awesome and is guaranteed to get your crowd ready for your less-than-conventional vows and reveal your matching wedding tattoos when you turn around to face the minister.

Yes. This is the tune of the standard Richard Wagner “Here Comes the Bride” but the arrangement is by Queen and, if you’re soon to be brother-in-law can get his three-piece garage band to practice this, it will be a phenomenal way of recognizing tradition but with a cool-kid rock spin.

The key is to enjoy your processional without freaking out the Mother of the Bride. If you can create a mood that makes her proud while still clinging to the notion that it is you two getting married, you win.