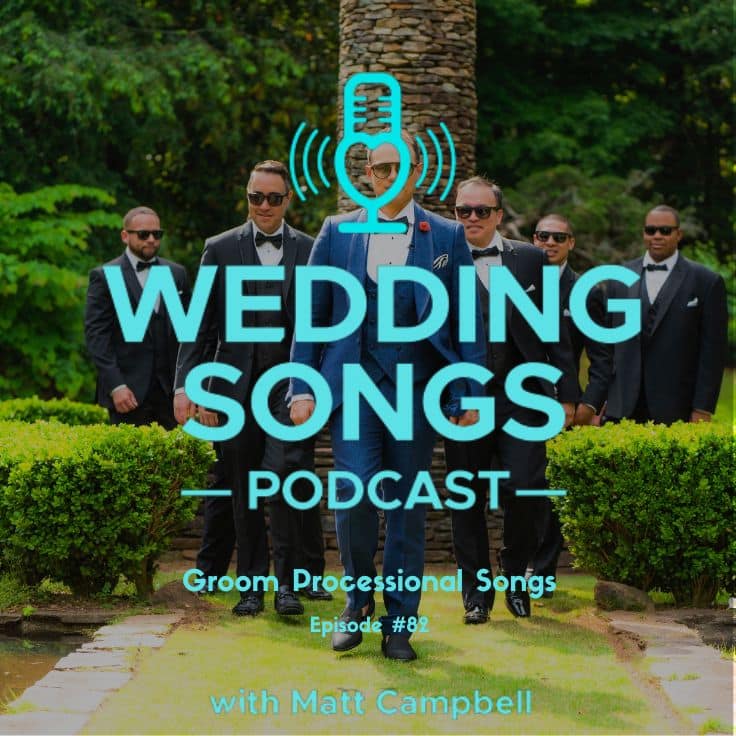 Matt talks about his favorite songs to play for the groom’s processional – as the groom walks down the aisle.  Hear some song lyrics that go with the picks too!

Welcome to episode number 82 of the Wedding Songs Podcast. I am Matt Campbell and today I am going to be talking about groom processional songs. These are songs you can play as the groom walks down the aisle as the ceremony begins. Great songs that really fit his personality. If you prefer to read the list or listen to the list, you can do so on our website MyWeddingSongs.com. While you are there make sure to sign up for our monthly newsletter (called the Newsletter). In it, we tell you about all the new songs released in the prior month and also great trending songs you can play on your wedding day. Let’s go ahead and get started with the list. I am going to be giving you these in chronological order by their release date.

Starting off in 2021 with “Can’t Help Falling In Love”. Yes, the famous Elvis song, but this is the Music Trave Love cover. It is two guys with acoustic guitars making it a very classy song to play as the groom walks down the aisle. Next up, also in 2021, is “Marry You” the acoustic cover by The Moon Loungers. This is a cover of the song by Bruno Mars. You really have to listen to the lyrics of this to make sure it fits your story, but it is a very popular wedding song that was made into an acoustic cover. As a mid-tempo song in the Pop genre, we have “Butterflies” by MAX, Ali Gatie released in 2021. This is a great song that you can play with the lyrics…I won’t stop getting butterflies, I get ’em every time I look into your eyes. This song was actually created for his wife on their first anniversary. If you are looking for something more up-tempo, then the Indie artist Vance Joy released “Missing Piece”. Lyrics include…That missing piece is found, You know when you’re by my side, darling. Nothing can bring us down.

If you are into Alternative Rock, then LANY’s (LANY is for a combination of Los Angeles and New Your) “Nobody Else” with the lyrics…It’s all a crazy trip. But life ain’t about what you do, It’s who you do it with. Just for R&B fans, Brian McKnight released “Nobody” with the lyrics…I’ll kiss nobody else’s lips. My command is your every wish. You can believe, for sure. I’ll be nobody’s man but yours. An excellent Country song you can have is “Look At Me Now” by Matt Stell with the lyrics…I lost it the second I saw you in that dress, And your daddy was walkin’ you down. Thought I’d never do this, But look at me now. It really does talk about your wedding day and the groom’s processional. One of my favorite songs on the list, in 2020 is Justin Bieber’s acoustic cover of “Intentions”. Lyrics include…Shower you with all my attention. Yeah, these are my only intentions. This acoustic cover is a good choice. Another great Country song, released in 2019 is Cody Johnson’s “On My Way To You” with the lyrics…I was just passin’ time, Kinda just passin’ through, On my way to you.

A very popular Pop song is James Arthur’s “Falling Like The Stars”. For EDM fans I have Kygo & Whitney Houston’s “Higher Love” released in 2019. Another great R&B song is “Beyond” by Leon Bridges released in 2018 with the lyrics…I’m scared to death that she might be it, That the love is real, that the shoe might fit. She might just be my everything and beyond. One thing to consider when planning processional songs is where your wedding is going to be. Some churches may not allow some of the songs that I am selecting today. You may have to go to an instrumental version or a classical song depending on the rules of the church. There are many Kane Brown songs you can choose for your processional song. I selected “Live Forever” released in 2018. “Stand By Me” by Ben E King is a very popular wedding, but I am going to select a version by Florence + The Machine released in 2016. Famous lyrics include…No, I won’t be afraid. Oh, I won’t be afraid, Just as long as you stand, stand by me.

Jack Johnson had his wedding song “Better Together”, but Us The Duo released their cover in 2015 for Indie fans. Lyrics include…It’s not always easy and, sometimes life can be deceiving. I’ll tell you one thing, it’s always better when we’re together. Another choice for Alternative Rock Fans is “Electric Love” by BORNS for a mid-tempo song you can walk down the aisle to. A popular Folk selection is “I’m Gonna Be (500 Miles)” by Sleeping At Last from 2014. It was first released by the Proclaimers. Just for Rock fans, in 2014 Foo Fighters with the acoustic version of “Times Like These” making it a little more wedding friendly. American Authors had their song “Best Day Of My Life”, but as our first instrumental song, we have Vitamin String Quartet version of that song. For Pop dance music fans we have “The Man” by Aloe Blacc in 2013, and “Marry Me” by Jason Derulo also in 2013. The singer-songwriter group Ortopilot released “Grow Old With You” in 2012. Romantic lyrics include…I could be the man who grows old with you. I wanna grow old with you. I have to add this next song to the list just because it is one of the most popular wedding songs of all time, It is “Marry Me” by Train. The lyrics talk about “Will you marry me”.

For Christian fans, a very popular wedding selection is “When I Said I Do” by Matthew West with the lyrics…Now for better or for worse are so much more than only words. And I pray every day will be the proof. That I mean what I say when I say ‘I do’. “Bless The Broken Road” by Rascal Flatts in 2004, And of course, the great R&B wedding song “Let’s Get Married” by Jagged Edge featuring Run but this is the ReMarqable Remix which is a bit faster tempo. There are other covers of this that are a little bit slower, In 2000 Coldplay released “Yellow”. There have also been a lot of cover songs to this if you really love this song. For Rock fans, I had to throw in “Nothing Else Matters (Instrumental)” by Apocalyptica released in 1998. If you are a true Rock fan then this is a cover that you could have as the groom walks down the aisle. If the groom is a wrestling fan, then “Real American” by Rick Derringer is a good choice. This was the Hulk Hogan theme song back in 1985. “Sharp Dressed Man” by ZZ Top from 1983. This could go for the groom processional or even for the groomsmen for that matter.

I am going to close out with a few great songs from the movies. “Star Wars Main Theme” by John Williams, “Gonna Fly Now (Rocky Theme)” by Bill Conti, and of course, the last song on the list, the “James Bond Theme”. I selected The London Symphony Orchestra. So there you have a few groom processional songs that you could play to walk down the aisle. If you prefer to read the list or listen to the list you can do so on our website MyWeddingSongs.com. And like I said, you can sign up for our monthly newsletter. There are a lot of new songs coming out each month that you should know about. Also, trending songs that you could add to your wedding day playlist.

This is our first podcast of October 2022. We release a new episode every two weeks on Saturday, In two weeks I will be talking about Country Entrance songs as you come into the wedding venue. Thank you for listening, and have a great day.