Skip to content
Home > Offbeat > 16 Best Bass Songs Of All Time for Guitar Bassists
My Wedding Songs is a reader-supported website. As an Amazon Associate, we earn revenue from qualifying purchases. Purchases made through links on this page may earn us a commission but also support the artists.

It’s no secret that the bass guitar has held an important place in music history, as the iconic instrument has been featured in countless tracks across various genres. But what bass songs are considered the best?

For as long as we can remember, bass guitars have been used to create low and powerful sounds, which can add a level of uniqueness to any track. Because of this, the charts are now filled with songs that use bass, with some of the most famous anthems in the world featuring the instrument.

So if you love bass music and want to sample some iconic tracks, then you have come to the right place, as we have compiled a list of the 16 greatest bass songs of all time. These bass records cover a wide spectrum of genres and are ideal for parties and solo music sessions. 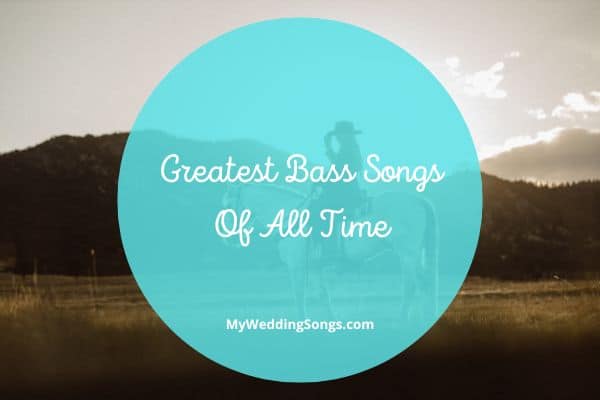 We all know that Queen ranks as one of the best rock bands of all time, as their work consists of notable hits such as bohemian rhapsody and we are the champions. However, the band is also known for this sultry disco number, which features a memorable bass riff as the backbone of the anthem.

This now iconic tune was the result of John Deacon’s musical talent, as it combined classic rock with the rise of 80s disco. Deacon would also play several instruments on the recorded track, with the song now being credited to his name.

Released in 2005, this bass track is now considered to be one of Gorillaz’s best songs and is notable for being their most successful album. While the track is now known for its stunning animated music video, it also features a prominent bassline, which sets the anthem apart from other bass records.

Because of this, the song is now considered one of the best bass tracks of all time, as it rebelled against convention and created something new.

Add to this the song’s themes of oppression and intellectual freedom and you have a track that continues to stand the test of time. While there are many records that use basslines, this one still manages to remain on its own.

We told you bass has been used for a long time.

First released in 1969, this track was the result of Walker’s active imagination, as he wanted to find a new and ambitious sound that contrasted with his previous work. In the mid-1960s, Walker would leave behind his teen audience and produce more experimental tracks, with this particular number being one of the most historic.

The classic rock anthem features a cacophony of different instruments, which are combined into a smooth and somewhat busy tune. However, the track is most notable for its eternal bassline, which flows through the duration of the song.

If we return to the 00s, we have this iconic number from Linkin Park, which should be put on loud if you want to appreciate the song’s creative genius.

First released in 2000, the song was a loving tribute to Chester Bennington, who was the band’s lead singer until his tragic death. Because of this, the track features a classic rock and roll bass, which recalls the rock anthems of the 70s and 80s.

When it comes to this 90s classic, it can be hard to determine an exact genre, as the song sits somewhere between jazz and funk. Featuring Mike Watt’s signature creative style, the track was first released on the 1991 album ‘flying the flannel’, which provided a great incite to the band’s experimental techniques.

The song starts with an iconic pulp beat before it transforms into a selection of bass riffs that further demonstrate the creator’s musical talent.

The Black Eyed Peas hold countless titles to their name, which include ‘where is the love’ and ‘imma be.’ In fact, the band is most known for their songs with strong basslines, with boom boom pow now being seen as one of their best.

Featuring a combination of bass and electro music, this song remains a unique entity on the charts and is sometimes classed as one of the most rated singles of all time. Because of this, we would recommend this number to anyone who loves bass music with a smooth and modern beat.

Now ranked as one of the best songs ever written, this classic anthem was the result of Who member John Entwistle, who is now considered one of the most influential rock bassists of all time. Known for its iconic themes of youth and rebellion, this song was also one of the first to feature a prominent bass solo.

When listening to this track, you will notice the steady bassline at its core, which also comes with fluid embellishments and other wonderful additions such as Pete Townshend’s violent downstrokes and feedback.

Because of its unique composition and timely themes, this anthem has often been credited as the start of hard rock.

The next track on our list is notable for being Jet’s most successful song to date, as it saw an increase in popularity once it was released on the band’s tracklist.

Similar to the other bass songs we have mentioned, this track features a rich combination of musical genres and techniques, which results in a song that is perfect for fans of classic rock and upbeat tempos.

When it comes to the success of Sly Stone and his infamous band, a lot can be said about Larry Graham, who was the band’s lead bassist. A passionate music lover, Graham was known for his kind soul, as well as his numerous contributions to this song and its later success.

In the anthem, Graham invented what is now known as a slap bass, which is a form of bass that combines percussion and rhythmic techniques. Since its conception, the technique has become synonymous with the foundations of funk and is now featured in countless songs and tracks.

If Larry Graham had never used his musical talent, we would live in a very different world, one where Bootsy Collins and Flea never achieved their prominence.

The next bass song on our list is now considered to be one of the best Three Days Grace tracks ever released, as it captures the band’s unique sound and aesthetic. Despite their wide selection of records, this particular anthem remains a stand-out for the band and features one of the best basslines ever heard.

In contrast to the other tracks we have mentioned, the bassline here cuts through the song and is paired well with some amazing rock vocals. When you listen to this song you might think that the bass boost is on, but we promise it isn’t.

Despite being attributed to Marvin Gaye, this song’s unique sound is actually the result of James Jamerson’s incredible bass skills, which saw him perform on various songs and albums for Motown.

Nowadays, Jamerson is credited with some of the greatest dance hits ever made, as his bass style would often feature chromatic runs and jazz inversions. Because of this, James is now considered to be one of the most influential bassists of all time, with the extent of his talent now evident in songs like this.

If you want something that screams 90s grunge, then you will adore this classic anthem from Nirvana, which features one of the more distinctive basslines.

It’s no secret that Nirvana’s sound remains one of the most identifiable, as the band spent years honing their craft. Because of this, their songs can easily be picked out of a crowd and continue to be featured in blockbuster movies.

When it comes to the foundations of bass music, Paul McCartney has a lot to be respected for, as it was his incredible talent that made the bass guitar into a lead instrument. Following his departure from The Beatles, McCartney would continue to make some of the best bass songs of all time, which included this melodic track.

This song is most notable for its crowded but spare riff, which adds to the flow and funk of the overall piece. In fact, John Lennon even referred to it as one of Paul’s best songs, which resulted in its success on the US charts.

It was with this song that Imagine Dragons was able to break into the mainstream, as the chill vibe and powerful lyrics were enough to set the band apart from their peers. However, this track is also notable for its strong bass, which can be heard throughout the duration of the song.

Since its release, the track has become an anthem for alternative rock and has featured in films and television shows. However, we also think its music video should get a mention, as it features stuffed animals battling in an arena – it’s awesome!

Muse is a band known for its intricate basslines, which feature prominently in this classic track. Known for its iconic riff, the song became one of Muse’s most successful songs, although it wasn’t enough to push the band into the mainstream. Even now Muse is seen as a somewhat niche offering in terms of alternative rock.

However, this does not mean that this song has lost any of its original luster, as it continues to provide a unique sound that will shock and inspire generations for many years to come. It’s just a shame that a lot of people haven’t heard of it.

Despite being known for their contributions to acid and psychedelic rock, Cream also holds other notable titles to their name, which cover a diverse spectrum of genres. Out of these tracks, you will find a badge, which was one of the band’s final singles before their eventual retirement.

Featuring a haunting bass performed by Jack Bruce, the song carries a simple tune, which is made all the more notable for its fluid bassline. Because of its melodic and somewhat basic composition, the song is accessible to most listeners and also proves the talent of Bruce and his later work.

And there you have it, those were the 16 greatest bass songs of all time. We hope that you found our list informative and that you agree with our top picks.