Skip to content
Home > Word Songs > 27 Best Dog Songs – Songs With Dog in the Title
My Wedding Songs is a reader-supported website. As an Amazon Associate, we earn revenue from qualifying purchases. Purchases made through links on this page may earn us a commission but also support the artists.

National Dog Day is celebrated annually on August 26. The day is a reminder that dogs need to be rescued and adopted from reputable businesses. A great way to celebrate the day is to adopt a dog from a shelter or pure breed rescue business. 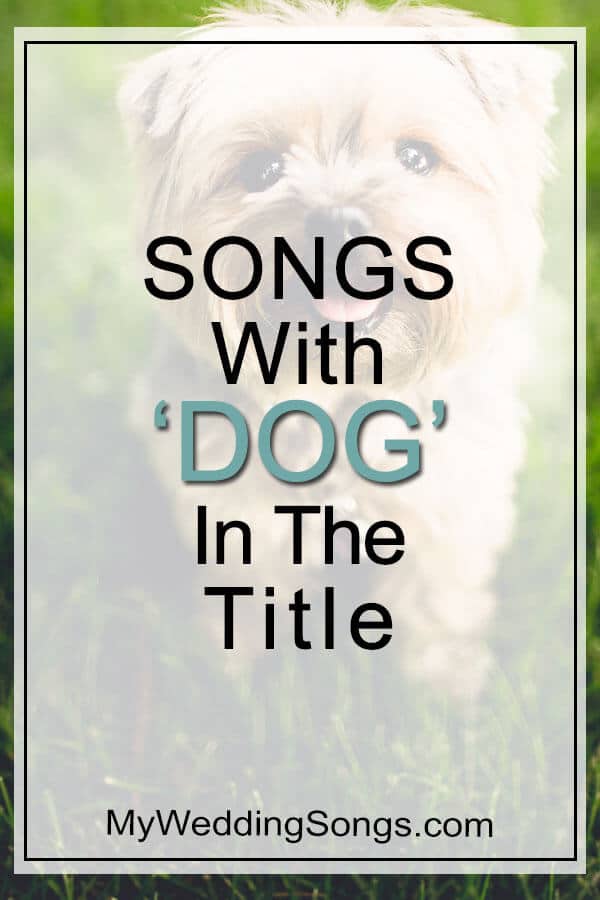 Dogs not only make great companions and part of our families, but they also assist people and have real jobs. Dogs assist the blind in getting around walking. Other dogs are employed by police departments and the federal government as dogs to seek drugs and help capture criminals.

You can also play Dog songs on Take Your Dog To Work Day. TYDTWD is celebrated on the Friday after Father’s Day in June.

How can you celebrate National Dog Day? First, play songs with the word dog in the song title. Then, give your dog special treats for the day, but not chocolate. Take your dog for a walk or take them to a dog park to play.
You can also get your breed of dog as a sticker or as a magnet to put on the tailgate of your car or car window. You can also get a t-shirt from your favorite breed of dog.

I Wish Dogs Could Live Forever – Tyler Farr
2020, Only Truck In Town

Who Let The Dog’s Out? – Baha Men
Released 2000, Soca
Album Who Let the Dogs Out

Hair Of The Dog – Nazareth
Released in 1975, Rock
Album Hair of the Dog

Me and You and a Dog Named Boo – Lobo
Released 1971, Rock
Album Introducing Lobo

What a Dog/He’s a Tramp – Oliver Wallace and Peggy Lee
1955, Lady and the Tramp Soundtrack

3 Popular musicians with the word Dog in their name

Temple of The Dog – Popular Songs include “Hunger Strike”, “Say Hello 2” “Heaven”, and “Reach Down”.

Three Dog Night – Popular songs include “Joy To The World”, “An Old Fashioned Love Song” and, “Mama Told Me (Not To Come)”