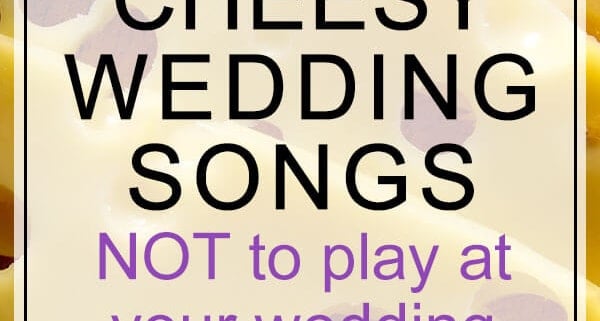 When thinking of cheesy wedding songs, particular songs will always come to mind. The issue is that the meaning of cheesy means different things to different people. When most people think of cheesy songs, they think about how the songs make them do stupid things like the Hokey Pokey and the Chicken Dance. While others love the group interaction and the fun created when the Hokey Pokey and the Chicken Dance are played. Therefore, the issue is this.

If you want to see a complete list of songs to avoid, see our list of Do Not Play Songs at Weddings. 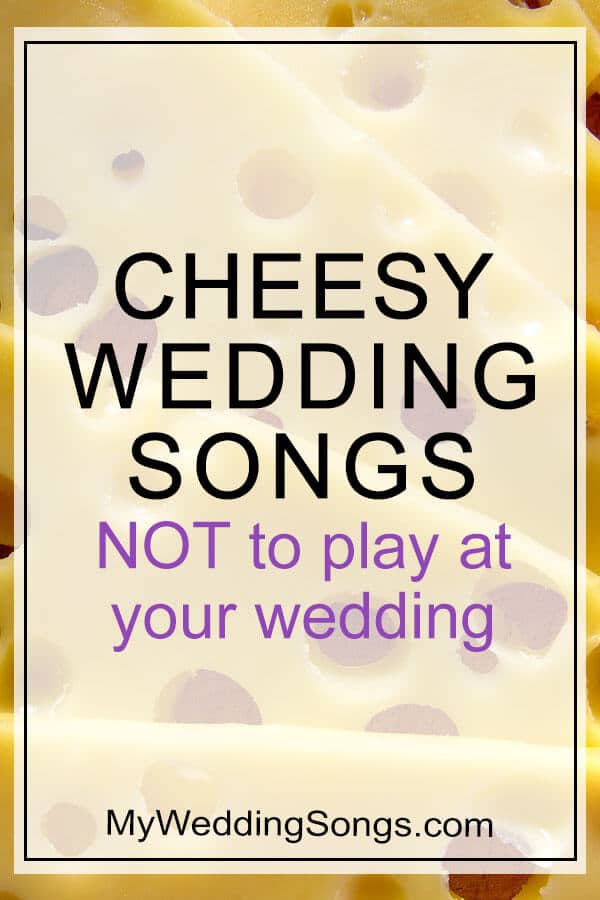 According to the Urban Dictionary, cheesy is trying too hard, unsubtle, and inauthentic. Basically, songs that make you do actions that you do not want to do can be portrayed as being cheesy. Cliche songs are also seen as being cheesy due to them being overplayed at most weddings. Songs that reflect a fake emotion are also determined to be cheesy. As a result, cheesy is in the eye of the beholder.

So, here is a list of some songs that we would categorize as cheesy wedding songs.

Celine Dion – My Heart Will Go On
This song is well overplayed and about living without a loved one that passed on.

Baha Men – Who Let The Dogs Out
This song falls under being corny and inappropriate for a wedding.

Village People – Y.M.C.A.
The song has been played everywhere for every sporting event. There’s plenty of new dance songs to fill the dance floor.

The Chicken Dance and The Hokey Pokey
The spotlight should be on the bride and groom throughout their wedding. However, do you want the spotlight on you while performing these children’s songs?

Los Del Rio – The Macarena
The pitfall of the Macarena was the sheer amount of times played on the radio and at every public event just to get public participation.

Brooks & Dunn – Boot Scootin’ Boogie
Most people who know how to line dance learned from this song while practicing over and over. The same goes for the song being played at weddings.

Gloria Gaynor – I Will Survive
Part of being cheesy is being fake. I will survive is about surviving after a breakup. No better example of a fake wedding song.

Jive Bunny – Swing The Mood, and Grease Megamix
Most people love to hear their favorite songs, not just 15 seconds of it. If you are going to play a song at a wedding, don’t fake it play it in its entirety.

Any Milli Vanilli Song would be inappropriate at a wedding.

Jazz music is great for background music for weddings. However, true Jazz fans do not consider Kenny G as a true Jazz artist but rather new age. So if you are looking for Jazz music, you may skip Kenny.

Staying away from hardcore rock and hardcore hip hop would also be a good idea. Try not to stray away too far from popular music. The worst wedding songs are the ones no one knows and will be seen as cheesy.

Listen to our Cheesy wedding songs playlist on Spotify.