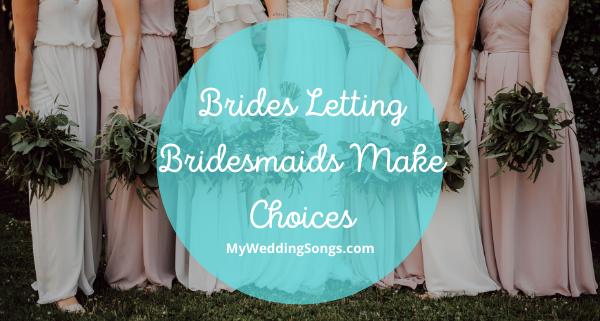 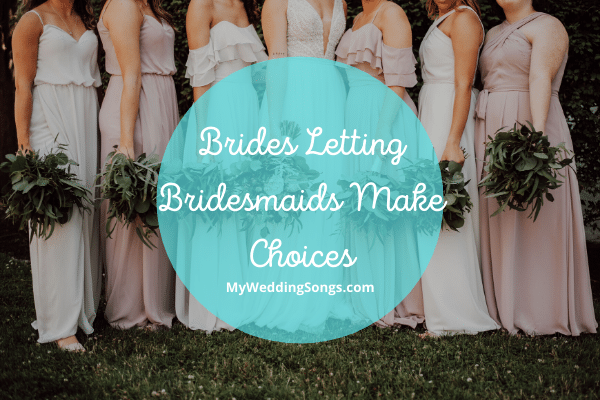 The days of the overbearing, control-freak bride are over! Everywhere, bridesmaids are rejoicing that they don’t have to wear a dress that’s been chosen for them (presumably after the bride has had a few drinks), they don’t have to wear their hair in a severe chignon that makes them look twenty years older, and they’re not going to be micromanaged anymore by a bride who needs someone to push around after her parents have pushed her around all day.

The new trend is to let bridesmaids make choices up in their own minds about many aspects of their wedding participation.

I’ve been to weddings before, and the bride was a nightmare, says Sarah, a bride from New York City, who has been a bridesmaid six times for friends and relatives. So when my sister asked me to be a bridesmaid, I feared the worst. But my sister said that we could all choose the style of gown we wanted, she had no preference in how we wore our hair, and she had no preference on a bridal shower. Whatever we wanted to do was fine with her. I almost thought I was being Punk’d.

Sarah’s experience echoes what’s going on in the wedding world right now. Dress designers are encouraging brides to let their bridesmaids pick out the most flattering tops and skirts for their own body shapes and comfort levels, which makes bridesmaids very happy. They can make their own style and budget choices, as long as they stick to the color and designer chosen by the bride. And even that is up for grabs these days. Sharon Naylor, the author of The Bridesmaid Handbook and a PashWeddings.com resident wedding expert, is planning her own wedding right now. I just told my Matron of Honor that she can pick out any dress style she wants for herself and for the bridesmaids, as long as it’s full-length and formal. Our wedding colors are green and white, so I let Jill “ who is an artist “ decide between the moss, celery, hunter, and every other variation of green on there. It’s not a decision I have to control. Jill chose three possibilities so far, and I love them all. She gets to pick the final design.

A bridesmaid who can choose her own dress is a happy bridesmaid and will wear the dress again in the future. It’s even become a trend to have bridesmaids in coordinating shades of a color. Some brides with fairer skin might love a brighter color, while bridesmaids with darker skin might love a different shade. It still makes for lovely photos and personal presence when the bridesmaids are in a range of colors. Look at the shades of orange leaves in an autumn tree, for instance, says Sharon Naylor. They’re not exactly the same hue, but it works.”

The same applies to the hairstyle. Today’s brides are no longer so controlling that they demand their bridesmaids get the exact same updo to make them a matching set. I just saw this on My Super Sweet Sixteen, where the birthday girl insisted on uniform French braids and threw a fit when the braids were not to her exact specifications. No bride wants to be like that anymore, says Naylor. Now, brides assure their bridesmaids that they can wear their hair any way they like. They might ask for an updo, but it’s the bridesmaids make choices of updo. We’re far from the days when brides demanded that their bridesmaid’s order $200 hair extensions ˜to give the image I’m looking for.

And for shoes, brides may only go as far as saying, Wear silver heels with an open to give uniformity in the wedding photos. They’re not choosing a designer, model number, price, and dye job order and sending their bridesmaids a˜you must buy this by Thursday’s e-mail”.

And then there is the bridal shower. We went through a period where they were not surprised parties, the bride virtually took over the plans and stuck her bridesmaids with the bill, and bridesmaids resented paying way above their budget level for a party that they considered tacky or too extravagant considering they still had to pay for their travel expenses to get to the wedding. Now, brides are saying what type of party they would like, such as afternoon brunch, provide an organized guest list with guests’ addresses or e-mails, and letting the group decide on everything from the menu to the games. It’s the bride’s party to enjoy, but not to plan.

Why is this trend on the rise? Why have brides stepped back and allowed their bridesmaids so much personal freedom in all of the wedding areas? It’s a combination of personal experience (the bride has been a bridesmaid several times and never liked being bossed around), seeing some truly offensive selfishness of brides on television, and the fact that brides are choosing only their closest friends as their bridal party members. In this age of personalized weddings, there’s no longer a push to include his sisters who you’ve never met or including those who had you in the bridal party long ago. Everyone wants to be The Nice Bride, and they have a lot of trust and faith that their bridesmaids will make great decisions on their own.

Consider it the Golden Rule comes into play, as more brides consider their relationships with their bridal party members. This is not a time to boss them around. They’re doing the bride a favor, and now “with gratitude being a key ingredient to any bride’s mindset“ the brides are acting with kindness, consideration, and an open mind towards their closest women. I love letting them make their own decisions, says Kim, a bride from San Francisco. My friends are all so stylish, I know they’ll choose something gorgeous. And they were so grateful that they weren’t being told what to wear. They said I was their favorite bride of all time!

Another category where the do your own thing approach is coming into play: allowing bridesmaids to decide which showers they’ll attend. In our global world, brides have multiple showers thrown for them. The first and main one is always by the bridesmaids, but then there are others thrown by friends and relatives. Traditional etiquette stated that the bridal party should attend all showers, but today’s bride allows her maids to pick and choose according to what works best for their schedule, budget, and travel plans. So these extra invites are not a Must.

And finally, while the bride often gives the bridesmaid’s decision-making power over so many of their own plans for the wedding, there is one area where the bridesmaids still defer to the bride: the bachelorette party. The bridesmaids will plan a party to suit the bride’s style, not the other way around. So if she’s not a drinker, the bride isn’t forced to endure a pub crawl or a risque party with a male dancer. She may be a spa-going type of bride, so that’s what her bridesmaids knowing her so well will plan for her.

It’s a far more enjoyable thing to be chosen for a bridal party now that these new rules have come into play.

Sharon Toris is a freelance writer and contributor to the top women’s and bridal magazines such as PashWeddings.com. She lives in Morristown, New Jersey. © 2007, Blue Grotto Media, Inc.