Skip to content
Home > Wedding Songs by Year > Top 2008 Wedding Songs for I’m Yours
My Wedding Songs is a reader-supported website. As an Amazon Associate, we earn revenue from qualifying purchases. Purchases made through links on this page may earn us a commission but also support the artists.

From Robin Thicke to Michael McDonald, there is something for everyone in this list of 2008 wedding songs.

You’ll find meaningful ballads that can be used for your ceremony and your reception, and you’ll want to share them all with your new spouse. 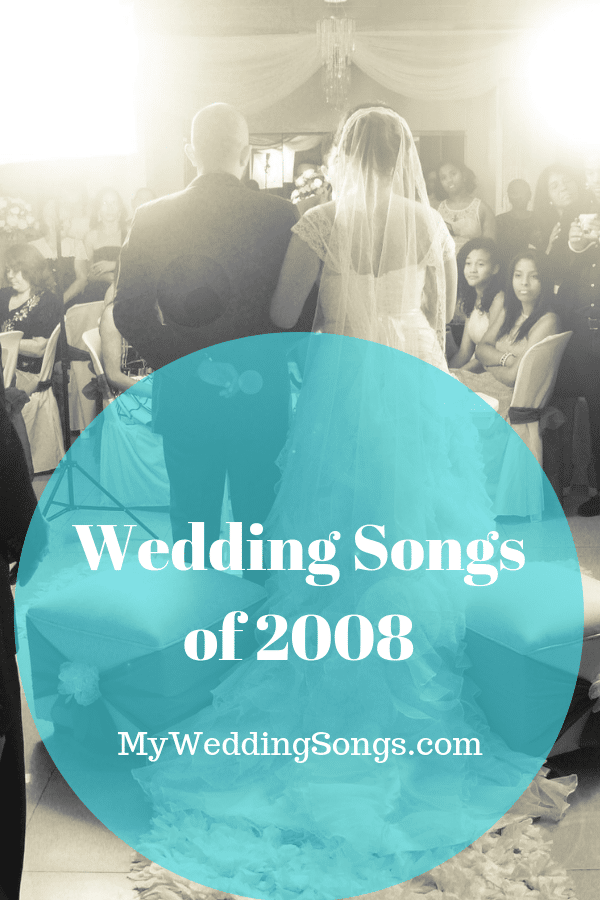 I’m Yours – Jason Mraz
February 2008, We Sing. We Dance. We Steal Things.
This 2008 single from singer-songwriter Jason Mraz will find favor with many young newlyweds, and it has the right vibe to be used in several ways for modern weddings. The best choice might be to save it for a special dance between the wedding couple at their wedding reception.
So I won’t hesitate anymore, no more

It cannot wait, I’m sure
There’s no need to complicate
Our time is short
This is our fate, I’m yours

The Time of My Life – David Cook
May 2008, David Cook
This song was the debut single in 2008 for American Idol superstar David Cook, and it has become a staple of modern wedding ceremonies. The songs reinforce that a wedding day should be the pinnacle of life, a moment in time that is celebrated forever with the one you love.

All I Want to Do – Sugarland
May 2008, Love on the Inside
Jennifer Nettles made Sugarland a pop and country sensation with songs like this one, a smoky uptempo number that draws on the powerful vocals of Nettles. Some couples like to use this for their first dance as a man and wife, while others use it to create a lighthearted backing track for cutting the wedding cake.

(Your Love Keeps Lifting Me) Higher and Higher – Michael McDonald
March 2008, Soul Speak
Former Doobie Brothers frontman Michael McDonald put his raspy, iconic voice to good use on this cover of a soul classic. This is a perfect song to introduce the new bride and groom to their wedding guests as soon as the formal ceremony is over, and other couples like to make it the song for their wedding recessional.

If Today Was Your Last Day – Nickelback
November 2008, Dark Horse
Nickelback sings about making the most of every moment with a new spouse in this song from 2008, an acoustic-driven ballad that stresses loving to one’s maximum capacity. It is an alternative rock, so the best wedding day use would be to include it on the DJ’s reception playlist.

Would you find that one you’re dreamin’ of?
Swear up and down to God above
That you finally fall in love
If today was your last day

Just Got Started Lovin’ You – James Otto
2007 carryover, Sunset Man
This song proved to be the one and only hit for country singer James Otto, and it is chosen by wedding couples that like country music with a modern sound. The lyrics and sultry vocals of Otto make the song especially suitable for the all-important first wedding dance.

I’m thankful for the weekend
But two days in heaven just ain’t gonna do
This is gonna take forever, darlin’
Girl, I just got started lovin’ you

Crush – David Archuleta
August 2008, David Archuleta
Some of the best stars to emerge from American Idol were runners-up, and David Archuleta is one of the most famous. This debut single from Archuleta has a playful vibe that younger newlyweds will appreciate, and it serves as a nice interlude to precede the wedding reception speeches.

All that we could be, where this thing could go?
Am I crazy or falling in love?
Is it real or just another crush?
Do you catch a breath when I look at you?

Always the Love Songs – Eli Young Band
September 2008, Jet Black & Jealous
The Eli Young Band made this a country chart-topper in 2008, and the song draws on the inspiration of classic love ballads. Play it as a special dedication to your spouse, or you can also play it in the background music as the wedding guests are seated.

River of Love – George Strait
November 2008, Troubadour
George Strait is considered to be the King of Country Music and songs like this one show why the artist is still going strong after a long career. Many brides want this song used as a part of the wedding processional, and the song’s lyrics are simple and genuine.

Hallelujah – Alexandra Burke
December 2008, Overcome
Alexandra Burke was the first artist to reveal this modern classic to the world in 2008 following her X-Factor appearance, and the tune has been covered by Pentatonix, John Cale, and a host of others. “Hallelujah” has become one of the biggest wedding songs of the century, and it can be used in almost every part of a wedding ceremony.

Be sure to check out the popular 2007 wedding songs too.

Sticking With You – The Decemberists
November 2008, Always The Bridesmaid
This classic song from The Velvet Underground was covered nicely in 2008 by pop group The Decemberists, and it reflects the commitment that is such a focus on your wedding day. Couples typically like to give this sentimental song an important place in the wedding festivities, so use it for your processional or recessional.

33 Miles was one of the top alternative Christian bands of the 2000s, and this became one of the group’s biggest hits. Couples with strong spiritual values will find that it offers a nice blend of romantic and religious imagery.

You’re the Only One – Eric Benét
Eric Benét possesses one the most soulful voices of the R&B genre, and he used it beautifully on this straightforward declaration of true love. The song should be played as you and your new spouse enter the reception area, and you can also incorporate it in other portions of the wedding ceremony.

The Sweetest Love – Robin Thicke
September 2008, Something Else
“The Sweetest Love” was one of the early hits for pop superstar Robin Thicke, and it established him as one of the voices of the modern generation. Every bride wants to be reminded on her wedding day that she has found the sweetest love of all, and this song will serve that purpose well.

Sweetest love
Finally I can’t believe
Cause you and me, you’re my sweetest love

Woman – Raheem DeVaughn
January 2008, Love Behind the Melody
Every wedding needs a strong selection of love songs that are suitable for dancing, and this R&B hit from Raheem DeVaughn is guaranteed to have everyone moving in celebration with the bride and groom. It is also nice that the song’s lyrics celebrate the glory of the bride on her special day.

Love Remembers – Craig Morgan
May 2008, That’s Why
Craig Morgan kept it simple with this 2008 country hit, a song that brides love to use as a part of their wedding processional. It has emotional lyrics that are crafted to spotlight the importance of everlasting love as the years go by.

Johnny & June – Heidi Newfield
March 2008, What Am I Waiting For
Heidi Newfield used one of the most celebrated love stories in music as inspiration for her 2008 hit. The song conveys that the bride wants to have a love like the one that was shared by Johnny Cash and June Carter, and it works just fine as an alternative wedding march for the bride and bridal party.

Roll With Me – Montgomery Gentry
August 2008, Back When I Knew It All
Country duo Montgomery Gentry put a new twist on themes of everlasting commitment with this 2008 song. It reflects the desire of every married couple to find that special someone that will grow with them throughout the years and make them better people.

Next, see a list of the popular 2009 wedding songs.

We are about done capturing a list of our favorite wedding songs with this list of wedding songs from 2008. If you have a song that should be included in our list, be sure to comment on it below.

Celebrating weddings in 2008. Where were you and what was happening?

Congratulations on your wedding of 2008. You share your anniversary with the following events.

Learn more about 2008 on Wikipedia. Thank you for visiting our page – weddings of 2008.

Have a favorite wedding song from 2008? Please share he song below in the comments.