Did your big brother make a big impact on your life? Maybe he was your protector. He might even be your twin. Your childhood is full of memories together and you want to honor your relationship. Choosing a sister-brother song at your wedding honors a lifetime of memories. 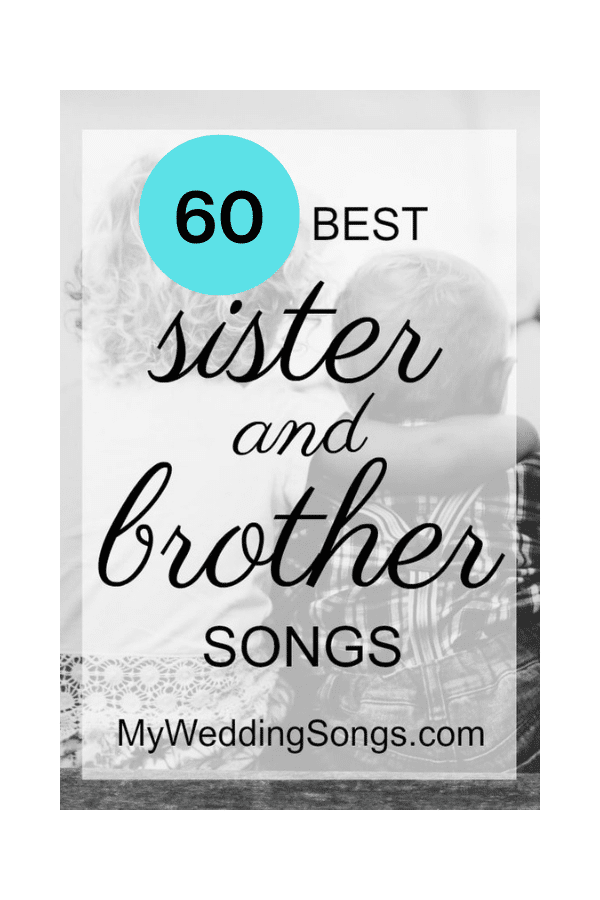 What is a Sister-Brother Song?

A sister-brother song is a special song between a bride and her brother. We recommend that you select a song that has special meaning between both you and your brother. This could be a sister-brother dance, a slideshow, or when he walks down the aisle. It all depends on what you would like to do as the wedding couple.

“It seems like every set of siblings has some sort of family dance, whether it moves they choreographed as kids or a song you love to rock out to in the kitchen when you’re all home for Thanksgiving. Make sure your tune of choice gets played during the reception, and ask your brothers to join you in the middle of the dance floor to bust a move.” Jaimie Mackey

How do I include my brother at my wedding?

Maybe your brother doesn’t want to dance. That’s okay, too. You can include your brother in your wedding party. Many wedding couples are breaking traditional gender roles such as bridesmaids and groomsmen. So your brother can definitely be the bride’s best man.

If your brother is shy, he can be an usher or officiant. Talk to your wedding coordinator and future husband. You don’t want surprises, though, the day of.

“We’ve frequently seen siblings cast as program attendants, guest book hosts, ushers and junior-status bridesmaids and groomsmen (when much younger) – but there are several meaningful ways in which siblings can contribute to your day.” Marquette Avenue Events

Is it normal for the groom’s sister to be a bridesmaid?

It’s up to you but remember that your children may be playing together in the future, reminds Aviva Samuels in a Brides.com article.  Including your sister-in-law at the wedding is a decision that should be made by you as the wedding couple. If your future husband and his sister are very close, a sister-brother song could replace the mother dancing with the groom.

Remember, this is your celebration. Talk about the options with each other and your professional wedding planner.

A Sister-Brother Song Should Hold Meaning

Sister-brother songs are special when the bride has a special relationship with her brother. In addition, if a bride’s parents have passed away, it would be a special gesture to have a sister-brother dance to replace the father-daughter dance. If the bride has multiple brothers, the selected song can play as the bride starts dancing with the oldest brother. Then, the younger brothers can cut-in as the song plays.

If a special song is not known between the bride and her brother, we suggest our top 60 sister brother songs below.

Listen to our sister brother songs playlist on Spotify.

Here is a song that was sung by a sister to her brother at his wedding:

As a bonus, here is a Sangeet brother-sister song: