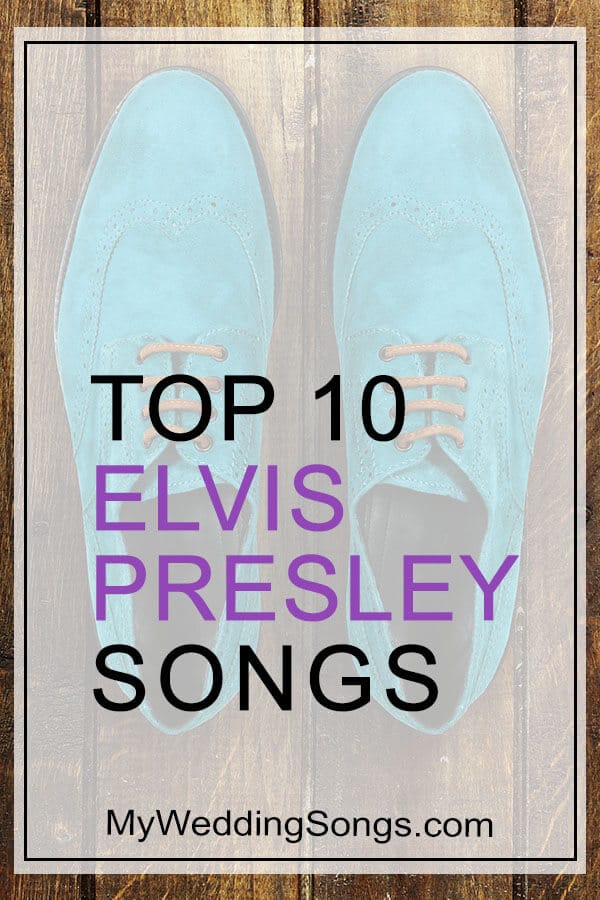 Elvis Presley was the only son of poor sharecroppers from Mississippi. He grew up in a tiny shack in Tupelo but went on to become the biggest rock and roll star the world has ever known.

Elvis was drafted into the U.S. Army in the 1950s, and many believed that the world would forget about the singer. Upon being discharged Presley resumed his career with a long string of movies and hit records. He continued performing until his untimely death in 1977 at the age of 42.

The home of Elvis was called Graceland and is still a major tourist attraction in Memphis, Tennessee today. Fans flock to Graceland each year to celebrate the life and legacy of Elvis Presley.

Elvis Presley’s music career started in 1953 when his first “acetate disc” with singles My Happiness and That’s When Your Heartaches Begin was released. Elvis had his first number one hit in 1956 and his last in the U.S.A. in 1969 with Suspicious Minds.

#1 Can’t Help Falling In Love
1961, Blue Hawaii
This song from the movie Blue Hawaii is one of the world’s most enduring love songs and wedding ballads, and it can be used in many parts of the wedding ceremony. Many couples choose to have this song played for their first dance as husband and wife, but it can also be used to accompany cutting the wedding cake.

Let’s rock everybody, let’s rock
Everybody in the whole cell block
Was dancin’ to the Jailhouse Rock

#4 Hound Dog
1956, Elvis Presley
Did you know the song was first released by Big Mama Thornton?

You went away and every day was misery
But now you’re coming back to me
Hot dog, my heart is gonna go insane

The song is based upon a woman getting rid go her philandering man and kicking him out to the street.

#5 Suspicious Minds
1969, Elvis Presley
Did you know the song was first released by Mark James?

The song’s story is is a bad relationship and the need to get past their issues in order to keep their relationship.

#6 Blue Suede Shoes
1956, On Album Elvis Presley
Did you know the song was first released by Carl Perkins? The lyrics stemmed from Johnny Cash’s story of a military regulation airmen’s blue suede shoes.

Well, you can do anything
But stay off of my blue suede shoes

A little less conversation, a little more action, please
All this aggravation ain’t satisfactioning me

#8 Heartbreak Hotel
1956, the song was released as a single hit song.
The song is based upon a newspaper article about the suicide of a lonely man who jumped from a hotel window.

Well now, if your baby leaves you
And you have a sad tale to tell
Just take a walk down Lonely Street
To Heartbreak Hotel

#9 All Shook Up
In 1957, the song was released as a single hit song.
The song stayed atop the Billboard Top 100 for eight weeks.

And quiet nights and gentle days with you
Memories, pressed between the pages of my mind

Love me tender, love me long
Take me to your heart
For it’s there that I belong
And will never part

This song was the theme from the King’s very first movie, and it is still a favorite of modern wedding couples. The song is well-suited as an alternative processional and can be played as the bride makes her way down the altar, or it can be played as guests are being seated.

Love Me
1956, Elvis
This was one of the first love ballads that became a number one hit for Elvis, and it still makes lists of the King’s very best songs. You should play “Love Me” during a tender wedding reception moment or add this ballad to the songs that are playing while your wedding guests are being seated.

To your arms someday I’ll return to stay
Till then I will remember too
Every bright star we made wishes upon
Love me always, promise always

This song was a hit for the Hawaiian crooner Don Ho before Elvis covered it during his legendary 1973 Hawaiian concert performance, a show that was broadcast live around the world. This is a song of tenderness expressed from a man to his bride, so save it as a special dedication to her at the wedding reception.

This is a song that was originally made famous by The Righteous Brothers, but it was covered to perfection by Elvis Presley. The King was fond of playing the song solo on a piano during his concerts, but you will want to choose the studio recording with all the instruments when playing this song at your wedding.

Loving You
In the 1957 movie Loving You

I will spend my whole life through
Loving you, just loving you
Winter, Summer, Springtime too

This was the title song from Elvis’ second major motion picture, a soft guitar ballad that speaks of eternal love and dedication. The slow tempo and lyrics make it a good choice if your bride wants to walk down the aisle to something a bit different.

Elvis was known for rock songs, and this lively rocker has been covered by many modern artists including country star Tanya Tucker. Even though it has a fast tempo the lyrics are still meaningful, and she’ll appreciate your expression of love when you have the wedding DJ spin this Elvis classic.

Elvis performed this song for the movie Blue Hawaii, but it has endured for more than 40 years as a wedding classic. You don’t have to be from the islands to appreciate this song, and it is easy for any wedding band to learn and play.

Elvis was big on covering the hits of other artists, but he freely admitted that he did not like this song by B.J. Thomas. Even though it was not his favorite song to sing, Elvis lent his emotional delivery to lyrics that describe how it feels to find true love.

Something
Performed it on his 1973 Aloha from Hawaii TV special.

This song was originally recorded by George Harrison of the Beatles and became a top hit for the Fab Four, but Elvis introduced the tune to a whole new audience. We would suggest using this love ballad at a wedding to introduce the happy couple for the first time, but it is sometimes used for the send-off.

Are You Lonesome Tonight?
1960

Are you lonesome tonight
Do you miss me tonight?
Are you sorry we drifted apart?

This love ballad became of the most-requested songs in Elvis’ live performances, and it still gets requested today by modern wedding couples who crave love songs from a simpler era. The best way to include the song in your wedding is as a dance selection, or it can be added to the musical interlude as the bridal party exits the chapel.

It’s now or never, come hold me tight
Kiss me my darling, be mine tonight

This love song is one of the most iconic that was ever recorded by Elvis, and it is based on the Italian “O Sole Mio” ballad that has been used in many Italian weddings. This is a song that you should save for the first dance between the husband and wife, and ask everyone to join in midway through.

Making vows and promises is what the wedding day is all about, and that is what Elvis sings of in this love song. A minor hit for the King, the song enjoys renewed importance today as a staple of modern wedding reception playlists.

I Love You Because
1956, Elvis Presley

This song has been covered by many country and pop artists, but the Elvis version is the one that endures in popularity today. It can be used in many ways, but most couples seem to like playing it as they are lighting a unity candle.

Do you have a favorite Elvis song, not on our list?  Please share it below so that we can add it!