Swing songs are the best way to get people on the dance floor at your wedding reception. There are many types of swing dances including West Coast Swing, East Coast Swing, Shag, Jitterbug, Shim Sham, Jive, and Lindy Hop.

The swing era is from 1935-1945. For more examples of swing era songs, please visit our best of the 1940’s song list. Swing music was popularized by Big Bands with charismatic bandleaders; the swing beat has existed before that.

Although the swing era is what we commonly think of for swing music, many current artists have carried the torch including Christina Aguilera, Cherry Poppin’ Daddies, and Brian Setzer Orchestra. Swing era musicians include Glenn Miller Orchestra, Dorsey Brothers, and Duke Ellington. 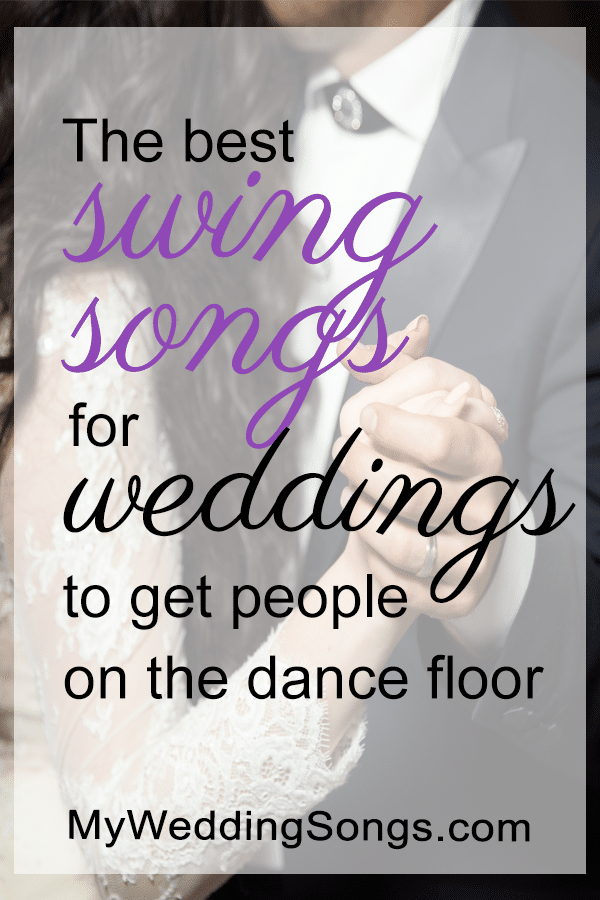 What Is Swing Music?

Swing music was the pop music of the 1930s and was popularized by the Big Bands. Swing rhythm is technically pushing the beat a bit. For the less technical, we just know it makes us want to dance.

“In traditional jazz, swing is typically applied to eighth notes. In other genres, such as funk and jazz-rock, swing is often applied to sixteenth notes.” Wikipedia

Swing dancing is characterized by an 8-count circular basic or “swing out” and has an emphasis on improvisation. Swing can be danced to any style of music but is primarily danced to Jazz and Blues songs where the beat is swinging. Swing dancing was very popular in the 1920s through the 1940s and saw a resurgence in the 2000s and with Generation Y.

In addition, all racial backgrounds performed swing music. It was not just for one type of person from the beginning. However, with the rise of bebop and the Musicians’ Union recording ban in 1942, swing faded away in the hearts of most. Orchestras performed most swing music with many band members. It was very difficult to travel with so many people and make a profit as time went on.

Swing is Fun and Sophisticated

If you are looking for a more upbeat song for your first dance, swing songs are it! Everyone loves to see a groom twirling the bride around the atmosphere. Swing songs have a classification of being more sophisticated and classy. Swing songs are very appropriate for black-tie events. Throughout the years people from all walks of life enjoyed swing music.

Bring Swing Into Your Wedding Reception

Think dancing swing is too hard? It really isn’t. You can include instructions as part of the reception like we suggest for line dancing.

“A lot of people love watching swing dancing but don’t think that they could learn those steps themselves. If you have guests like this, take it upon yourself to teach them a few swing steps. By the time the night is over, they’ll be dancing like old pros.” SwingFever.com

What Is The Jitterbug Dance?

The Jitterbug dance is a style of swing dancing that became popular in the early 1900s. It is 6 counts of music with 4 basic steps.

Here is a video of the basic jitterbug dance:

Traditional West Coast Swing includes 6-count and 8-count patterns. The dancers dance linearly and in a compact area. Other variations include whip, shag, and push. West coast swing is a slower dance than east coast swing

What are the Best Swing Songs for My Wedding Reception?

The best swing songs for your wedding reception have been listed below. Did we leave one out? Let us know in the comments.

Listen to our best swing songs playlist on Spotify.

Other ballroom song lists to read: