When you think of fun songs with a good beat, you’re going to think of rock and roll.

This is why rock songs are perfect for your wedding reception. A good beat is the key to getting people on the dance floor.

Rock songs can be played during the wedding ceremony through the reception.

Each song has its own theme so choose wisely and what means the most to you. 150 is a lot of songs. So, take your time browsing and click on the album to listen to the song.

Forgive us as we did our very best to remove all Pop songs from this list. Some are unavoidable.

There are still a few alternative rock songs and soft rock songs as well. You will also enjoy many songs of yesteryear and through today. 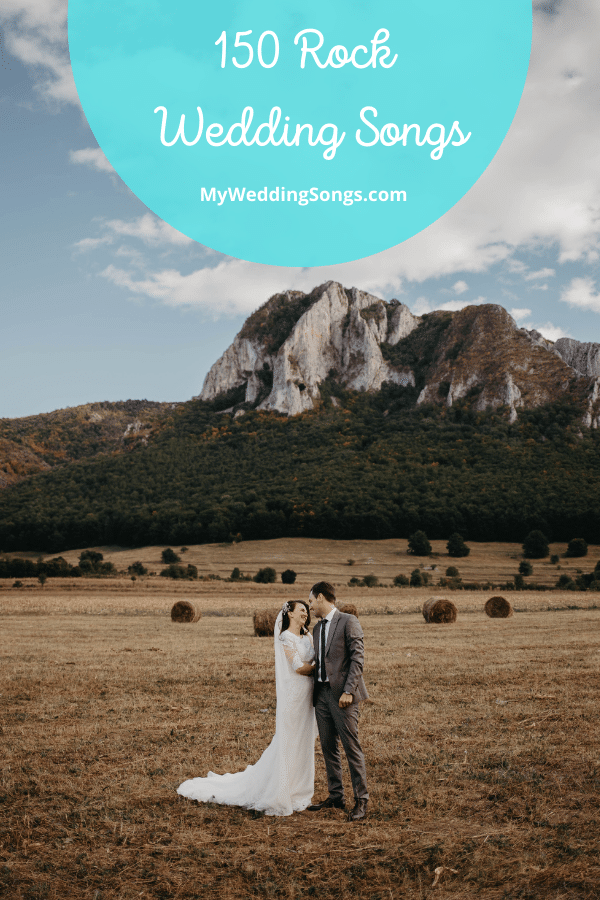 You will enjoy a list of the most popular and unique rock wedding songs for your wedding day.

Rock is a classic part of American culture and people of all ages love it — that backbeat gets everyone on the dance floor.

Strangers in a world full of lonely lovers
Find someone and take ’em by the hand
Sha-la-la, hey, hey, hey
I’m in a mood, so all you summer lovers, make you sway

Dancing in the deep?st oceans
Twisting in the water
You’r? just like a dream

You got me coming outta exile
Baby girl, you know I’m liking your style
You’re gonna get my love today

Love It When You Hate Me – Avril Lavigne, blackbear
2022, Love Sux

But you could still be pretty on the inside too
Your heart’s so cold, but I love the way you lie
Should’ve seen the red flags, but for you, I’m blind

Like a poison filling my veins
You’re the antidote

I’ve been waiting on you, waiting, waiting for a long time
Ooh it just keeps getting better
Maybe we could drift together

All of the stars out in the atmosphere
Wishing that they were you and me right here
They’re showing off for us, I don’t wanna forget it
I wanna memorize you, wanna stay here forever

Remember when you swore to God I was the only
Person who ever got you?
Well, screw that and screw you

And I said, “When I’m with you well it’s just like it’s the first time”
April 7th never meant as much as that night

Picking me up, the sound
Get your knee off the ground
They can’t touch us, we’re unaffected
‘Cause our love’s not hiding anymore

And if heaven doesn’t want us
Would you go with me to hell?
Hope you know I don’t want nobody else

You’re The One – Greta Van Fleet
2018, Anthem Of The Peaceful Army

broken – lovelytheband
2017, everything i could never say…

The Sound of Silence – Disturbed
2016, Immortalized

HandClap – Fitz & The Tantrums
2016, Fitz and the Tantrums

I Found You – Alabama Shakes
2014, A Long Way Down Soundtrack

One, two, three, they gonna run back to me
‘Cause I’m the best baby that they never gotta keep

I’m never gonna look back
Woah, never gonna give it up
No, just don’t wake me now
This is gonna be the best day of my life

Take my hand in this empty room
You’re my girl, and I’m your groom
Come to me my sweetest friend
This is where we start again

On Top Of The World – Imagine Dragons
2013, Night Visions

Sweater Weather – The Neighbourhood
2013, I Love You.

‘Cause it’s too cold
For you here
And now, so let me hold
Both your hands in the holes of my sweater

Little Talks – Of Monsters And Men
2011, My Head Is An Animal

There’s an old voice in my head
That’s holding me back
Well, tell her that I miss our little talks

Rhythm Of Love – Plain White T’s
2010, Wonders of the Younger

Me and You – Dave Matthews Band
2009, Big Whiskey & the GrooGrux King

I’d never sing of love if it does not exist
But darling, you are the only exception

But you and I, I think we can take it
All the good with the bad
Make something that no one else has but
You and I

Making love out by the lake to our favorite song
Sipping whiskey out the bottle, not thinking ’bout tomorrow
Singing Sweet home Alabama all summer long

Fall for You – Secondhand Serenade
2008, A Twist In My Story

Tangled Up In You – Staind
2008, The Illusion of Progress

Those three words
Are said too much
They’re not enough

Down, down in an earlier round
And Sugar, we’re going down swinging
I’ll be your number one with a bullet

I Write Sins Not Tragedies – Panic! At The Disco
2005, A Fever You Can’t Sweat Out

I Believe In A Thing Called Love – Darkness
2003, Permission to Land

More Than Anyone – Gavin DeGraw
2003, Chariot

I’m going to love you more than anyone
I’m going to hold you closer than before
And when I kiss your soul, your body’ll be free

The Reason – Hoobastank
2003, The Reason

Swimming through sick lullabies, choking on your alibis
But it’s just the price I pay, destiny is calling me
Open up my eager eyes, ’cause I’m Mr. Brightside

If I’m alive and well, will you be there and holding my hand?
I’ll keep you by my side with my superhuman might

Hey now, you’re a rock star, get the show on, get paid
And all that glitters is gold
Only shooting stars break the mold

Late night come home
Work sucks, I know
She left me roses by the stairs
Surprises let me know she cares

I Could Not Ask For More – Edwin McCain
1999, Messenger

It’s no surprise to me, I am my own worst enemy
‘Cause every now and then, I kick the living s*** out of me

I Don’t Want To Miss A Thing – Aerosmith
1998, Armageddon Soundtrack

It’s been one week since you looked at me
Threw your arms in the air and said, “You’re crazy”

Everlong (Acoustic) – Foo Fighters
1997, The Colour and the Shape

Touch your lips just so I know
In your eyes, love, it glows so
I’m bare boned and crazy for you

And I said, “What about Breakfast at Tiffany’s?”
She said, “I think I remember the film”
And as I recall I think we both kind of liked it
And I said, “Well that’s the one thing we’ve got”

I’ll Stand By You – The Pretenders
1994, Last of the Independents

You gotta keep ’em separated
Hey they don’t pay no mind
If you’re under 18 you won’t be doing any time
Hey, come out and play

Monday you can hold your head
Tuesday, Wednesday, stay in bed
Or Thursday watch the walls instead
It’s Friday, I’m in love

(Everything I Do) I Do It For You – Bryan Adams
1991, Waking Up the Neighbours

I can’t help it, there’s nothin’ I want more
You know it’s true
Everything I do
I do it for you

Love Of A Lifetime – Firehouse
1991, FireHouse

Nothing Else Matters – Metallica
1991, Metallica

Life is ours, we live it our way
All these words, I don’t just say
And nothing else matters

Marry him
Marry me
I’m the one that loved you baby can’t you see?
Ain’t got no future or family tree
But I know what a prince and lover ought to be

Say I got trouble, trouble in my eyes
I’m just looking for another good time
My heart, my heart
Kick start my heart

She takes me away to that special place
And if I stare too long, I’d probably break down and cry
Whoa, oh, oh
Sweet child o’ mine

Pour Some Sugar On Me – Def Leppard
1987, Hysteria

Now c’mon, take a bottle, shake it up
Break the bubble, break it up
Pour some sugar on me

C’mon, before we crack
Lose your blues
Everybody cut footloose

Come on Eileen, oh I swear what he means
At this moment, you mean everything
You in that dress, my thoughts I confess

And he’s holding her in his arms late, late at night
You know, I wish that I had
Jessie’s girl

One voice is clear above the din
Proud Arianne one word, my will to sustain
For me, the cloth once more to spin, oh
All of my love

And then she asks me
“Do you feel all right?”
And I say, “Yes, I feel wonderful tonight”

It’s only me who wants to wrap around your dreams and
Have you any dreams you’d like to sell?

Wastin’ away again in Margaritaville
Searchin’ for my lost shaker of salt
Some people claim that there’s a woman to blame
Now I think, hell, it could be my fault

Bohemian Rhapsody – Queen
1975, A Night at the Opera

Some Kind Of Wonderful – Grand Funk Railroad
1974, All the Girls in the World Beware!!!

Oh, my baby, she’s alright
Oh, my baby’s clean out of sight
Don’t you know that she is?
She’s some kind of wonderful

You Are So Beautiful – Joe Cocker
1974, I Can Stand a Little Rain

Sing it now, joy to the world
All the boys and girls
Joy to the fishes in the deep blue sea
Joy to you and me

Skippin’ and a-jumpin’
In the misty morning fog with
Our, our hearts a-thumping and you
My brown-eyed girl

The first staged performance of rock and roll did not take place until 1953 featuring Bill Haley & His Comets with The Dominoes. “Rock Around the Clock” became the first rock and roll song to top the pop charts in 1955. Other early producers of rock’n’roll included Elvis Presley, Buddy Holly, and Fats Domino.

Sixties rock and roll were most known for the British invasion with the likes of The Beatles, The Who, and The Rolling Stones. The 1960s were also filled with surf music, folk, Motown, and heavy metal. The seventies gave way to the popularity of disco. However, the 1970s had the beginning of punk rock, funk, and glitter rock.

What Era Is Classic Rock?

Some of the best songs to play at weddings are what’s considered classic rock — coming from the late 1960s and early 1970s. Some of the early 1980s brought new songs that slipped into that category but it’s rare. Think Rolling Stones instead of The Beatles and Heart over the Go-Gos. Classic rock songs are remembered by many from their youth and learned by every generation since. 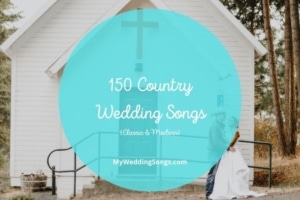 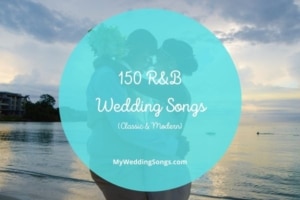 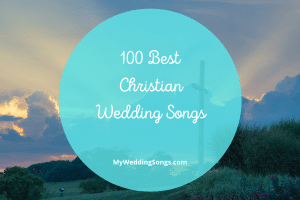 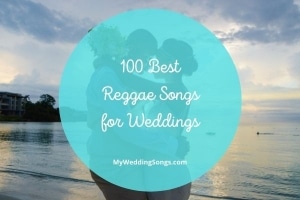 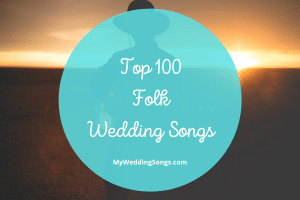