Country music is well-loved throughout the generations which makes it the perfect genre for your wedding reception. Our list of the best country songs includes classic hits as well as current chart-toppers. 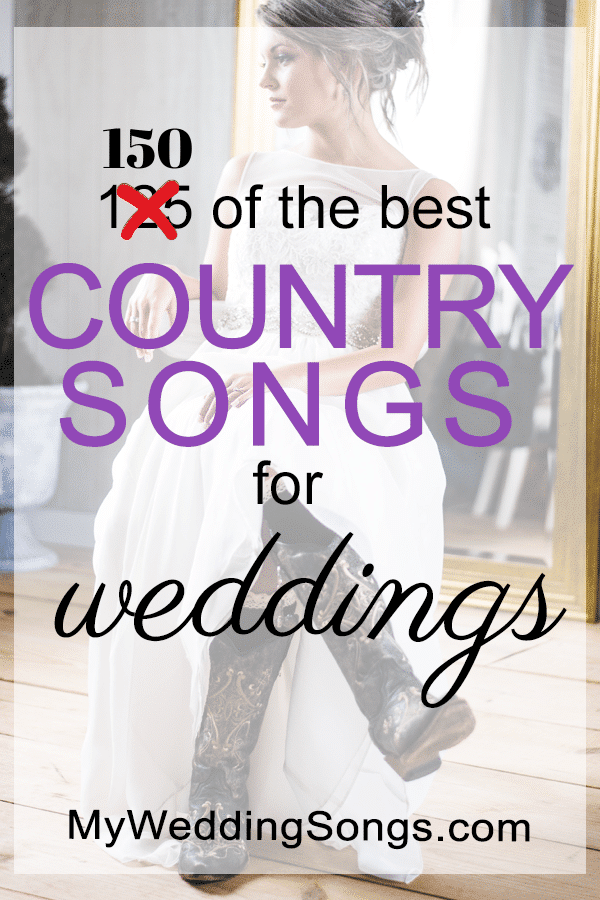 What Is Country Music?

Country music, also known as country and western, started in America in the early 1920s. Folk music was taken to the next level to create country music. Since then, country music diversified into different styles and sub-genres such as rockabilly, bluegrass, honky-tonk, country rock, and the latest version country-pop.

Nashville — The Heart of Country Music

The vast majority of country music has been both produced and recorded in Nashville since 1925. What later became known as the Grand Ol’ Opry started that year.

To this day, entrance into the Grand Ol’ Opry family is a prestigious accomplishment. Early musicians who made their trek to Nashville and became stars included Kitty Wells, Patsy Cline, and Ernest Tubb. With the early transition of a more pop-country sound, it paved the way for today’s country singers.

With the beginning of radio broadcast in the 1930s, anyone with a radio was exposed to the country genre. The Opry also helped promote country artists with its live stage broadcasts aired on television.

Just as everyone adored the rock and roll stars in the mid-fifties, people adored country stars starting in the 1930s. The western films of the 1930s and 1940s brought singing cowboys such as Gene Autry and Roy Rogers.

The popular form of Country in the 1940s was western swing. Western swing is a combination of jazz, big band, and blues. And, it’s super fun to dance to.

From Western Swing to Today’s Country

Western swing was responsible for introducing the steel guitar into country music. Honky-tonk music is what helped describe country music throughout the years with storytelling that included new love, lost love, beer-drinking, and faithful companions.

Another genre of country music is outlaw country, categorized by artists who called themselves as such. The Outlaw Movement grew with artists such as Conway Twitty, The Charlie Daniels Band, Johnny Cash, and Willie Nelson.

Country rock started in America in the late 1960s and carried through the 1970s and into recent decades with music artists such as The Eagles, Alabama, and Garth Brooks.

With the release of the movie “Urban Cowboy” in 1980, country music became popular again. The pop-country became mainstream with artists such as Dolly Parton, Eddie Rabbitt, and Kenny Rogers.

These are 150 of the best country songs to get people on the dance floor at your wedding reception!

(as calculated by downloads on Amazon)