Updated on June 8, 2022 | Written by Matthew Campbell (Editor of My Wedding Songs and veteran DJ)

The 1940s saw the US entering WWII as well as ending it. Ticker tape parades and famous kisses celebrated victories in Europe and Japan.

Emerging from that war changed the mood of the country and gave birth (literally) to the Boomer Generation.

The songs of the 1940s make us feel good, want to get off our chairs, and dance all night long.

That’s why they are the perfect decade to add to your wedding reception playlist! 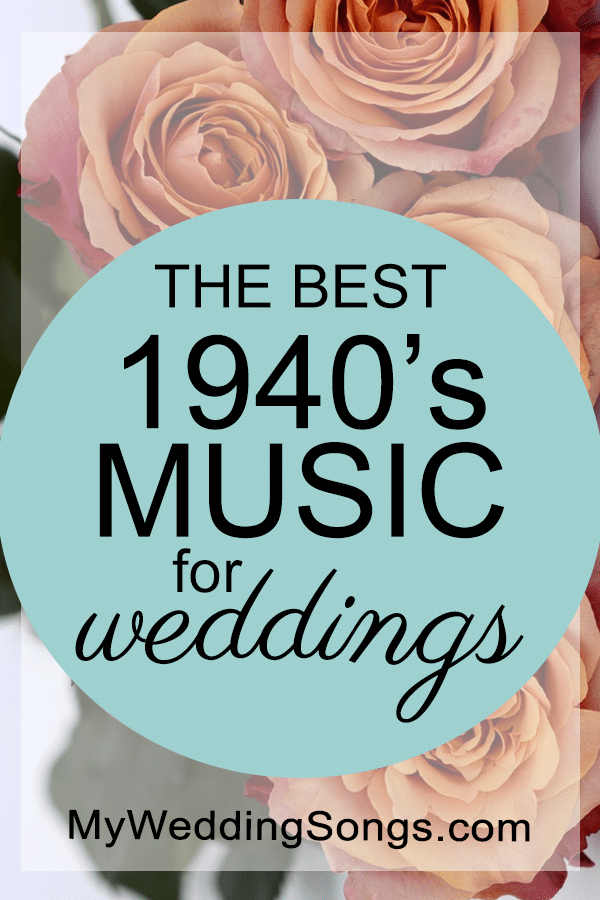 You will enjoy a list of the most popular and unique 1940s songs for your wedding day.

Every couple’s music tastes are different. Thus, we selected wedding songs from the 1940s that include many different music styles.

Best 1940s Songs For Your Wedding

We’ve calculated our favorite 1940s songs to get people on the dance floor at your wedding. Did we miss your favorite?

Say, lend me a coat – It’s up to your knees out there
You’ve really been grand – I thrill when you touch my hand
Why don’t you see – How can you do this thing to me?

A Tree In The Meadow – Margaret Whiting
1948, Jazz

Angels were singing a hymn to your charms
Two hearts gently beating, murmuring low
“Darling, I love you so”

Hugging and a kissing
Oh, what we’ve been missing
Lover man, oh, where can you be

Does it mean that our love is ending
Darlin’ I need you, lately I find
You’re out of my heart
And I’m out of my mind

I’ll whisper “Good night”, turn out the light, and kiss my pillow
Making believe it’s you

Empty pockets don’t ever make the grade
Mama may have, Papa may have
But God bless the child that’s got his own

I’ll Be Seeing You – Frank Sinatra & Tommy Dorsey and His Orchestra
1940, Jazz

In The Blue of Evening – Frank Sinatra & Tommy Dorsey and His Orchestra
1940, Jazz

But I can dream, can’t I?
Can’t I adore you
Although we are oceans apart?

They ain’t had any learnin’
Still, they’re happy as can be
Doin’ what comes naturally

I find that day by day you’re making all my dreams come true
And (so) come what may I want you to know
I’m (that I am) yours alone, and I’m in love (in love) to stay
As we go through the years day by day

It was just a wedding in June, that’s all that it was
But, oh, what it seemed to be
It was like a royal affair with everyone there
‘Cause you said, “Yes, I do” to me

Till the wells run dry
And each mountain disappears
I’ll be there for you, to care for you

I’ll always be near you
Wherever you are
Each night
In every prayer
Just whisper, I’ll hear you
No matter how far
So close your eyes
And I’ll be there

Dearly beloved, how clearly I see
Somewhere in Heaven you were fashioned for me
Angel eyes knew you
Angel voices led me to you

Cruising down the river on a Sunday afternoon
With one you love, the sun above waiting for the moon

One leaf is sunshine, the second is rain
Third is the roses that grow in the lane
No need explaining, the one remaining
Is somebody I adore

Dance on and on and on
A thousand people here have come to see the show
As ’round and ’round you go
So ballerina, dance

I’ve Got My Love To Keep Me Warm – Les Brown And His Orchestra
1946, Big Band

What do I care how much it may storm?
Oh, I’ve got my love to keep me warm

To spend one night with you, in our old rendezvour
And reminisce with you
That’s my desire

My Dreams Are Getting Better All the Time – Les Brown
1945, Big Band

I’ve tried to drum up
A phrase that would sum up
All that I feel for you
But what good are phrases
The thought that amazes
Is you love me, and it’s heavenly

Each time I cling to your kiss, I hear music divine
Bésame mucho
Hold me my darling and say that you’ll always be mine

It seems to me I’ve heard that song before
It’s from an old familiar score
I know it well, that melody

Don’t Sit Under The Apple Tree (With Anyone Else But Me) – Glenn Miller Orchestra
1942, Big Band

Stir for a couple of hours ’til dreams come true
Adds to the number of kisses, it’s up to you
Moonlight Cocktail, need a few

The memory of this moment of love
Will haunt me forever
A tropical moon, a sleepy lagoon
And you

I got spurs that jingle, jangle, jingle
As I go ridin’ merrily along
And they sing, “Oh, ain’t you glad you’re single”
And that song ain’t so very far from wrong

To spend one night with you in our old rendezvous

Why are the stars always winkin’ and blinkin’ above?
What makes a fellow start thinkin’ of fallin’ in love?
It’s not the season, the reason is plain as the moon
It’s just Elmer’s tune

She’s gonna cry
Until I tell her that I’ll never roam
So Chattanooga choo choo
Won’t you choo-choo me home?

Amapola, my pretty little poppy
You’re like that lovely flower so sweet and heavenly
Since I found you, my heart is wrapped around you
And loving you, it seems to beat a rhapsody

Those cool and limpid green eyes -a pool wherein my love lies
So deep that in my searching for happiness
I fear that they will ever haunt me, all through my life they’ll taunt me
But will they ever want me?
Green eyes, I love you

Hey, daddy, I want a diamond ring, bracelets, everything
Daddy, you oughta get the best for me lee-ya lee-ya

We don’t say “how are you”
And very seldom ask “what’s new?”
Instead we start and end each call with
“Baby confidentially I love you”

Come on down, forget your care
Come on down, you’ll find me there
So long town, I’m heading for
Tuxedo Junction now

Ours was a love song that seemed constant as the moon
Ending in a strange, mournful tune
And all about me, they know you have departed without me

Amor, amor, amor
This word so sweet, that I repeat, means I adore you
Amor, amor, my love

Recalling thrills of our love,
There’s one thing I’m certain of
Return I will to old Brazil

Now the light is with us and you’re right in the groove
You were only hungry for some musical food
You’re positively, absolutely in the mood

Again,
This couldn’t happen
Again
This is that once
In a lifetime
This is the thrill divine

Some enchanted evening, someone may be laughing
You may hear her laughing across a crowded room
And night after night, as strange as it seems
The sound of her laughter will sing in your dreams

If a flame is to grow there must be a glow
To open each door there’s a key
I need you, I know, I can’t let you go
Your touch means too much to me

It’s spring again and birds on the wing again
Start to sing again the old melody
I love you, that’s the song of songs
And they all belongs to you and me

If you’re satisfied
I’ll be at your side
Sunday, Monday or always

Remember it’s my heart
The heart with which so willingly I part
It’s yours to take to keep or break
But please, before you start
Be careful, it’s my heart

How long would it take me
To be near if you beckon?
Offhand I would figure
Less than a second

Poverty
May come to me, it’s true
But what care I
Say, I’ll get by
As long as I have you

Won’t you get hip to this timely tip:
When you make that California trip
Get your kicks on route sixty-six

I Love You For Sentimental Reasons – Nat King Cole
1946, R&B

Is you, is or, is you ain’t my baby
Maybe baby’s found somebody new
Or is my baby still my baby true

Near You – Francis Craig Orchestra
1947, Country

For that moonlit pass by the Alamo
And Rose, my Rose of San Antone
Deep within my heart lies a melody,
A song of old San Antone

When I got there, I say, “Yes, people”
They was really havin’ a ball!
Yes, I know
Boogie Chillin

I heard the news, there’s good rockin’ tonight
Gonna hold my baby as tight as I can
Tonight she’ll know I’m a mighty man

Caldonia! Caldonia!
What make your big head so hard?
I love you, I love you just the same
Crazy bout that woman ’cause Caldonia is her name

This is the G. I. Jive
Man alive
They give you a private tank
That features a little device called “fluid drive”
Jack, if you still survive

Do you have a favorite 1940s wedding song? Please share the song below and why it is special to you.

What Makes the 1940s Songs Special?

When you think of 1940s songs, you likely think of swing and big bands. Jazz became popular and its swing became the pop music of that era. The 1940s gave birth to rock and roll — not yet accepted by the masses.

The 1940s jazz artists include Rosemary Clooney, Bing Crosby, and Frank Sinatra. A form of jazz called scat also became popular with artists such as Ella Fitzgerald and Cab Calloway.

According to the Encyclopedia Britannica, scat music “is a jazz vocal style using emotive, onomatopoeic, and nonsense syllables instead of words in solo improvisations on a melody.”

The Culture Shift in the 1940s

The 1940s was stricken with the war ending with the finality of dropping the first nuclear bomb. This decade saw women going to work while men were off fighting a war. The war also got America out of the depression by creating many jobs. Popular film stars included actors Bob Hope, Bing Crosby, Clark Gable, and Humphrey Bogart. An invention prominent in the music industry took place in 1949 with the rpm 45 records. Although television’s debut was in 1939, commercial television with 13 stations became available to the public in 1947.

Radio was the main source of news, music, and entertainment in the 1940s. Pin-up girls became icons with enlisted men, such as Rita Hayworth and Betty Grable. A new look for women was introduced after the war ended – feminine dresses with long, full skirts, and tight waists. Men’s fashion was at its apex with their zoot suits. It’s difficult to separate culture, fashion, and music. So, what makes the music special?

Swing Dancing and The Jitterbug

From the upbeat sounds came a widely popular dance style – the Jitterbug. For a younger military generation, the Jitterbug overtook the slower waltz and foxtrot which were seen as boring and outdated. However, in the mid to late 1940s, the Jitterbug style recreated itself. It became easier to dance and regenerated itself as the beginning of rock and roll.